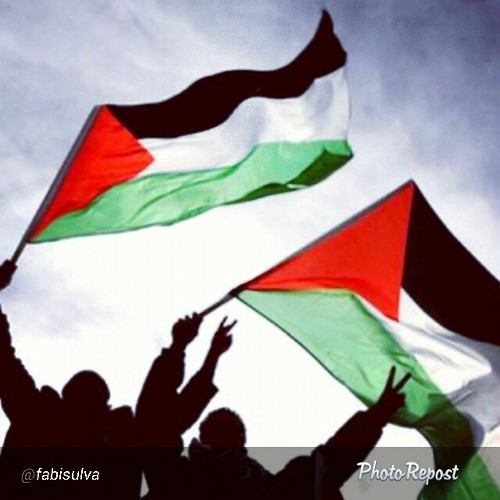 To Exist is to Resist.
(Image by Syeda Amina Trust ?)   Details   DMCA

Today is a day of rest and I badly need it. Yesterday was a very long day; I traveled by a small bus (shared tax) from Hebron to Ramalah where I met some international tourist. Two were from Italy, two from Ireland, one from Canada, and others from Germany, Iceland and even one Israeli woman interested in human rights for Palestinians. I have also met other Israeli citizens while filming demonstrations. Not all Israeli's are Zionists*, nor are all the settlers fanatics. But those that are not seem to be the exceptional minority of Israelis, that continues to shrink.

At about 6 P.M. yesterday I left Ramalah, again by shared taxi called a 'service taxi', pronounced "serveece". I was traveling to Jenin to meet my friend from last year, Mahmoud and his wonderful father Mustaffa, his mother Shafaq and the family. They have invited me to stay in their home on numerous occasions, as they do for many internationals. Last year I had promised them that I would not forget them, nor Palestine, and that I would return this year for the Olive Harvest Festival, which will be November 6th in Jenin. I am only staying in Jenin now until Monday when I will return to Hebron.

The international tourists that I met in Ramalah and I have decided to share a small apartment in Hebron when I return on Monday. We will each pay 110 New Israeli Shekels (INS), equal to about $30 per week. They, like me want to tour Israeli Occupation Forces (IOF) checkpoints, Palestinian schools, olive orchards, non-violent demonstrations, and take pictures and videos of them, as well as of any random street crimes against humanity.

The Free Palestine movement has a non-violent "weapon" that puts fear and rage into the Zionists*. The weapon is the camera and the truth. Palestinians who are known by the Zionists* to film IOF crimes are severely punished and threatened by organized mobs of settlers, police and IOF. Palestinians are constantly harassed threatened, jailed and lynched. It is rare to meet a Palestinian man who has not been in prison and tortured.

Internationals filming crimes are often blocked, sometimes roughed up by the Border Police, arrested and deported before their 3 month Israeli visa expires. Known internationals who come to Palestine as witnesses in solidarity with Palestinians are blacklisted indefinitely and denied re-enter by Israel. Zionists* fear that their crimes will be uncovered by international tourists for the world to see and the main stream media is a co-conspirator in the attempted cover-up, and are not reporting Israeli crimes against humanity.

My friend Mahmoud has a long day planned for me, and an opportunity for a unique experience for a Westerner; it is a bachelor party Arab style. It will be a long night of feasting, music, dancing and laughter. All the men and boys in the village of Burqin will turn out for it. I will take many pictures and videos to post on my Facebook page (David William Pear). Now I will take a nap (more to follow later).

"Here is more about the camera as a weapon of non-violent self-defense: I met a man in Hebron by the name of Badee. Badee took me to one of the refugee camps for Hebron's displaced Palestinians, their families and their descendants. Theses are Palestinians who where drive from there home in 1948, and after, by Israel colonization and expansion. There are still two refugee camps in Hebron, and many more in Palestine. The U.N. is supposed to fund social services for them, but the budget was never what was promised by the international community. Beyond ironic, Israel says that since he UN caused "the problem", the UN should pay for it.

After touring the refugee camp Badee took me to a friend's house near where an infamous execution of a wounded Palestinian man was shot in the head by an IOF soldier from the Boarder Patrol ,a most ruthless, powerful and feared unit, even by internationals. See the video on YouTube "Execution of motionless, unarmed Palestinian youth in Hebron".

The neighbor lives on a slope with a Zionist* settlement above. He has had to build a chain link cage around his house because settlers rain stones, garbage and feces down on his home. The IOF is stationed on the street in front of his home, and for anyone to enter his home they must climb the hill on a dirt path, sneak through the bushes and climb a fence to come in through the back door.

Palestinian lives are a living hell, but Palestinians refuse to surrender to the constant harassment, threats and oppression. I hope later to tell you the full story of the execution and the Palestinian man who took the video. I plan to meet with the man if it can be arranged.

The camera is a powerful weapon that Zionist* hate and fear. Badee is working on a project to get donated cameras from abroad, and have international tourists carry them into Palestine in their luggage. Even donated cameras have an expensive customs tax imposed by Israel on them, as well as any goods received by international mail.

The most powerful weapon against oppression and crimes against humanity is the truth. Dear Diary, I promise to do my best to tell you the truth, the whole truth and nothing but the truth during my journey. If one wants to support truth and human rights they could visit the website of "International Solidarity Movement", and other such organizations. I see them doing good work here in Palestine.

It is now late, we returned from the party at 1 A.M. I must get some sleep. Good night from Jenin, in occupied Palestine.

Related Topic(s): Israel; Oppression; Palestinian; Palestinian; Ramallah, Add Tags
Add to My Group(s)
Go To Commenting
The views expressed herein are the sole responsibility of the author and do not necessarily reflect those of this website or its editors.