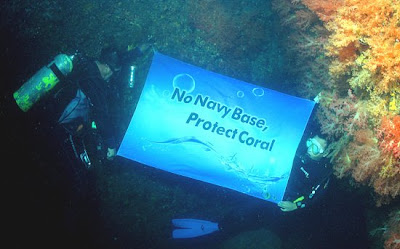 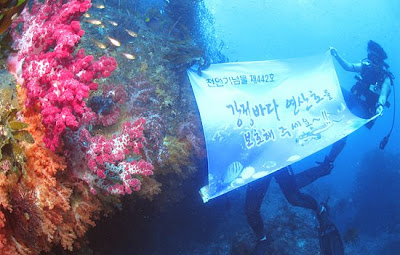 (Image by Unknown Owner)   Details   DMCA
Our annual Keep Space for Peace Week was a resounding success this year. We had more than 90 events in 13 countries – the highest total in recent years. We are grateful to all who organized video showings, protest events, and street leafleting to help educate the public.

Here in Maine we held two vigils at Bath Iron Works where the Navy’s Aegis destroyer is built. The Aegis is outfitted with “missile defense” systems and is now being deployed just off the coast of China as part of a doubling of U.S. military presence in the Asian-Pacific region.

China imports the majority of its oil through the Taiwan Straits and the U.S. strategy is to put in place the ability to choke off this importation thus giving the U.S. the ability to control the keys to China’s and the world’s economic engine. This is creating a dangerous arms race in the region.

On Oct 18, the Navy “Christened” a new Aegis destroyer called the Wayne E. Meyer (DDG 108) at Bath Iron Works (BIW) in Maine. Rear Admiral Meyer is known as the “father” of the Aegis program. The Navy boasts that the Aegis phased array radar gives the ship the ability to “track, target and destroy aircraft, cruise missiles, and ballistic missiles…to completely dominate a theater of operations.”

It was one of these Aegis destroyers that fired an interceptor missile in February 2008 that knocked out a wayward U.S. spy satellite that was falling back to Earth. At the time the public was told the satellite’s on-board hydrazine fuel would be a danger to the planet, but we have since learned that the fuel was largely gone at the time of the intercept. In the end the real reason for the shoot-down was to test the ability of the Aegis system to also function as an anti-satellite (ASAT) weapon.

The October 18 “Christening” was met by a protest organized by Maine Veterans for Peace and the Global Network in an effort to express opposition to the deployment of another “offensive” Aegis ship but also to call for the conversion of the BIW. For the first time ever, a worker from BIW was a featured speaker at the rally held just outside the shipyard gate. Peter Woodruff has worked at BIW for 27 years and told the 75 people assembled that “With the development of the Aegis weapons systems on Navy ships (Aegis is the Greek word for shield) the Navy became more reliant on satellites to guide the so-called ‘smart bombs’ to their designated targets over the horizon and warfare from ships became more long-range, less risky, and less personal. What was sold to the American public as a defense system was actually a system for offensive warfare.”

Woodruff called for conversion of BIW saying, “I can envision building floating wind farms right here at BIW. This is not a revolutionary idea. Shipyards in Europe have been partially or wholly converted from military production to wind turbine production. If a project like this were subsidized by the federal government, like the Navy ships are now, we could create clean, inexpensive, and sustainable power for Maine and the rest of the Northeast. We could expand BIW’s workforce to as many as 12,000 employees and work our way out of this severe recession we are sliding into. If you want to bailout this economy create jobs. We are standing on the edge of a Green Revolution in this country and we must take the steps to realize it as if our lives depended on it.”

In my own speech at the BIW rally I talked about a small South Korean island called Jeju that sits just off the coast of China. Jeju has been designated as an ecological preservation site by UNESCO for its rare and beautiful species of coral (such as Alcyonium gracillimum) and shells (such as Charonia sauliae) which are in the brink of extinction).
In 2002 the South Korean government announced the intention to build a Naval base on Jeju Island and since that time people have been organizing to stop the construction of the base. According to one South Korean peace organization (Solidarity for Peace And Reunification of Korea), “Setting the Aegis [destroyer] in Jeju Island and operating the ships as an element of constructing an Asian missile defense system is part of the U.S. military program. From the geographical point of view, the naval base in Jeju Island cannot have been anything else but the U.S. missile defense base on the sea. Jeju Island is at the center of conflict structure of northeast Asia in reference to missile defense system. The island is located at the gateway of East Asia. Recently, the strengthening of the U.S.-Japan-Republic of Korea military alliance led by the U.S. is an unstable fact. Under the circumstance, the naval base in Jeju Island would become a stepping-stone for the U.S. navy. It would also be inevitable that Jeju Island would turn to be a focal point of an arms race in Northeast Asia.”
Little did we know that as we were protesting against the “Christening” of the Aegis in Bath, Maine that activists from Jeju, on October 18, were holding an action to oppose the construction of the Navy base on Jeju Island. Six people from a local village on the island went underwater on October 18 and held banners amongst the colorful coral protesting the base and expressing their concern that the coral life would be destroyed by the Aegis.
Thanks to Global Network member Sung-Hee Choi, who lives in South Korea, we were able to learn about this protest under the waters of Jeju Island. This is just one example of how our international solidarity around weapons in space issues is growing. Next April 2-4 the Global Network will hold its annual space organizing conference in South Korea as we try to learn first-hand more about the dangers of U.S. “missile defense” deployments to surround and “contain” China.
The Jeju Island story completes the circle. It reveals how the weapons in space issue impacts even life under the seas. The people of Jeju Island are asking all of us to connect these dots and to help stop this deadly arms race from destroying their culture.
Peter Woodruff, working at BIW and courageously speaking out for conversion, shows us the way out. We don’t have to build weapons for endless war to provide jobs in our communities. We don’t have to waste our tax dollars on an arms race to control the world’s diminishing resources. We can build rail, solar, and wind power systems and protect our Mother Earth.