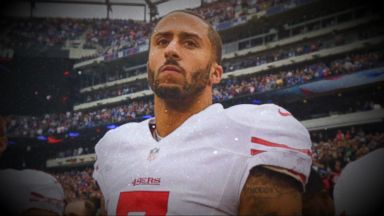 If black athletes in the NFL honestly think that African Americans who live under Old Glory are as "equally protected" as whites, then they should stand up during the national anthem and sing-along. But if they know that blacks aren't getting a square deal, and that blacks can be gunned down at any time by trigger-happy cops who never face the consequences, then they owe it to themselves and their country to demand change by remaining seated.

I'm sorry that football players have to go through this. I'm sorry they find themselves in a situation where they're forced to make a political statement. After all, they're not politicians and they don't want to be. They're private citizens like the rest of us who just want to do their jobs, make some money, and be left the hell alone.

But what choice do they have now? The epidemic of cop killings around the country is forcing people to stand up and say "Enough." So now black athletes are being asked to either stand up, sing along and act like highly-paid circus animals, or follow in the steps of Rosa Parks and Malcolm X and Mohammed Ali and the other people of conscience who put themselves at risk by acting on principal.

That's the choice they're faced with, isn't it? Do I act like a man and stand on principal or take the easy-way-out and go along with the crowd?

There is no third option.

Football players are not going to be able to sweep the whole matter under the rug like the Seattle Seahawks did last week by standing with arms linked (while the anthem was played) to demonstrate their solidarity with the victims of police violence. That was a total bullshit response. It doesn't matter if you stand separately or stand and link arms; when you "stand" you are paying tribute to the flag. Period.

No one wants to talk about these things because they make us feel bad about ourselves, they tarnish our sense of "exceptionalism" and our idiot belief that we are a "post-racial" society.

Post racial, my ass. There's a large group of people living in this country whose rights have always been provisional and who've never gotten a fair shake, and that sure as heck hasn't changed since Obama got took office, in fact, the situation is worse than ever.

When living under the American flag means that everyone is protected equally from killer cops, then I'll gladly stand for the national anthem. Until then, forget about it.

Related Topic(s): Athletes; Patriotism; Protest, Add Tags
Add to My Group(s)
Go To Commenting
The views expressed herein are the sole responsibility of the author and do not necessarily reflect those of this website or its editors.