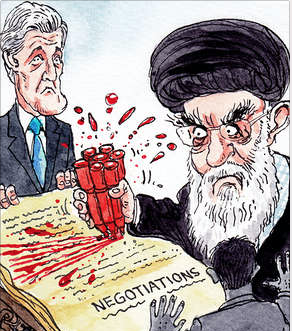 From the standpoint of Washington's doctrine of US world hegemony, the problem with Iran is its independence. Like Iraq, Libya, Syria, Venezuela, Ecuador, Bolivia, Brazil, Argentina, Cuba, North Korea, Russia and China, Iran is not Washington's vassal.

Washington was unwilling to admit the truth and to say that Iran was on its target list, because Iran would not submit to Washington's will. Instead, Washington decided to create fear of Iran among the American and European peoples. Washington did this by accusing Iran of developing nuclear weapons that Iran would give to terrorists or use itself against Israel, Europe, and America. When Washington placed anti-ballistic missiles on Russia's border, Washington lied to Russia that the purpose was to intercept (non-existent) Iranian nuclear ICBMs.

Washington's propaganda about the threat of Iranian nukes is now many years old despite the National Intelligence Report released by all 16 US intelligent agencies that Iran abandoned more than a decade ago its interest in nuclear weapons. Washington's propaganda has also continued with the aid of the Western media despite the fact that the International Atomic Energy Agency inspectors on the ground in Iran consistently report that there is no evidence of any diversion of enriched uranium to a weapons program. In other words, the IAEA inspectors can account for all of the enriched uranium by the perfectly legal energy program.

Nevertheless, Washington contends, Iran is making or is about to make nuclear weapons.

The nuclear weapons fabrication has always been a cloak for Washington's real intention, which is to bring regime change to Iran, whether from outside or inside, and return Iran to its previous status of a vassal state of the West. The Western imperialists never forgive those who escape or throw off their clutches.

Washington orchestrated the "nuclear threat" issue in order to prepare Americans and Europeans for a military attack on Iran.

Frustrated, the rabid neoconservatives acting through Washington's two-bit punk politicians have tried to block the agreement. The Republican Party, now controlled by Israel, even asked the crazed leader of Israel to address the US Congress in order to block Obama's agreement to the Iran deal.

To block the deal at this stage is to admit that the nuclear issue was never more than a cover for Washington's objection to Iran's independence.

Whether Obama is sincere, entrapped by Russian diplomacy, or relying on a false flag event to discredit Iran and thus nix the deal, I do not know. Israel, of course, wants Washington to remove all obstacles to its expansion in the Middle East. Having stolen Palestine, Israel wants southern Lebanon as its next acquisition.

What I do know is that as the nuclear deal with Iran is not the real issue, whether it succeeds or fails will have no impact, because Washington's objection to Iran is Iran's independence. Iran is in Washington's way. The nuclear threat hoax that Washington created was just a propagandistic way to bring insouciant Americans and Europeans around to an attack on Iran.

Iran remains in danger regardless of the success or failure of the agreement.

I am amazed that governments threatened by Washington always fail to see the real issue and instead accept Washington's definition of the problem. The contrived nuclear issue serves as a cloak for Washington's intention to overthrow the independence of Iran; yet the Iranian government and Iranian media have followed the lead of Washington and its presstitutes in accepting this contrived issue as the real issue. If Iran survives, it will be a miracle.

Related Topic(s): Iran; Iran Versus Israel; Israel; Nuclear Talks; Propaganda, Add Tags
Add to My Group(s)
Go To Commenting
The views expressed herein are the sole responsibility of the author and do not necessarily reflect those of this website or its editors.