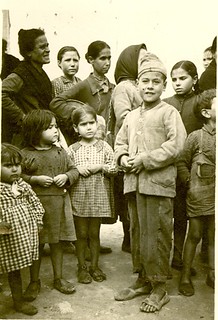 Adoption can be immediate or long sought after. And always worth it.
(Image by Mennonite Church USA Archives)   Details   DMCA

This is the month to honor Adoption but it Got Blasted under the table By Bombs, Shooters, Refugees and Politicians.

So nobody is talking about adoption.

But the strange thing is adoption is exactly what we should be talking about. Especially now. Surrounded by Bombs, Shooters, Refugees and Politicians.

Adoption is how we embrace people out of choice, instead of obligation.

I chose to adopt six children with challenges. I love all my children. Even the ones that came from my belly. But the adopted ones were more intentional. They had to be because the process was harder. Nobody just adopts six children because they got drunk one night and forgot to use a condom. Adoption is hard.

But so worth it.

I built a family of eight children into an army of love and acceptance. Their skills and their differences grew. They shone brightly. We were a rag tag bunch teaching each other and stretching the world around us.

Adoption is a blessing.

And so worth it.

My grandparents chose to adopt my father. He was three. They adopted him because no child had come their way. My grandmother must have wanted a baby very badly. I think this because in the old yellowed pictures of my grandparents my grandmother is always holding a doll. Always! She took it everywhere until the day my dad, a real child, disembarked from a train to call her mom. My grandma was a little crazy, but she sure loved my dad.

Adoption can be strange, immediate or long sought after.

And always worth it.

My parents chose to continue the fashion of acceptance and adopt my brother. He was the same age as my biological brother and an intended playmate. My adopted brother was of American Indian heritage and clashed with my folks. They found him awkward and slow and seemed to hate the way he looked and moved. He was left-handed and his elbows were always in the way. He was different. He had unusual boundaries and ideas. I loved him till he died and beyond. Adoption increased my heart; it made me more.

Every ouch is absolutely worth it.

Adoption is hard. It is a natural occurrence that even animals undertake. But it is also messy and it doesn't always end in Happily Ever After, yet it is always an opportunity for growth and improvement. If you choose it.

Lynette Louise aka THE BRAIN BROAD is doubly board certified in Neurofeedback and has an MS. She is studying for her PhD in Clinical Psychology with a specialty in Psychophysiology at Saybrook University Global mental health expert Lynette (more...)

Related Topic(s): Adoption; Awareness; Children; Family; People; Refugees; Teaching, Add Tags
Add to My Group(s)
Go To Commenting
The views expressed herein are the sole responsibility of the author and do not necessarily reflect those of this website or its editors.

When I was Easy to Rape, it was still Rape

Growing In and Out of Autism

The Abuse of Sensory-Processing Disorder Inherent in Autism

Dear President: No More Services for Autism Please. Let's Give Power and Education to Parents.