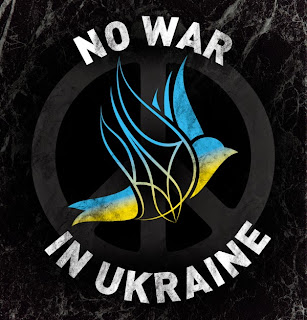 Neocons have successfully taken over both mainstream political parties in Washington. Obama's administration is infested with the likes of:

Secretary of War Ashton Carter who wants confrontation with Russia and "preventive war" against North Korea and Assistant Secretary of State Victoria Nuland who is anti-Russian and was instrumental in toppling Ukraine's elected president just over a year ago.

Anyone in the west that speaks out against this provocative US-NATO chaos plan is "Putinized" in a classic replay of 1950's style red-baiting.

Right after the US-NATO sponsored coup d'etat in Kiev the neo-Nazi's were sent to take similar control of Crimea after their chaotic Maidan split the country and initiated civil war.

Scores of local Crimean citizens did much to defend themselves from the vicious attacks by the nationalist death squads. Putin sent in the "little green men" to stabilize Crimea and the entire Russian operation was done without anyone (as far as I know) being killed. In a subsequent referendum 95% of Crimean's voted to join Russia.

Neo-Nazi's death squads have now been given official status inside Kiev's military. This means they are getting training from the US Army who are now in western Ukraine.

What is the plan? Continue to expand US-NATO bases up to the Russian border including Ukraine. Deploy so-called "missile defense" systems that are key elements in Pentagon first-strike attack planning. From eastern Ukraine US cruise missiles could reach beyond the Urals, where Russia's main nuclear forces are located.

By 2020, when the current phase of NATO missile defense will be fully implemented, the MD shield (taking out Russia's retaliatory capability) could be used after the US-NATO first-strike sword is thrust into the heart of Russia.

Russia has an aging satellite early-warning system and keeps its nuclear forces on launch on warning status -- thus the chance of accidental nuclear war increases. Forget any future negotiations on reductions of nuclear weapons -- Russia and China repeatedly warn that US deployments of MD have killed nuclear disarmament talks.

The overall strategy, recently spelled out in a Chicago speech by George Friedman of Stratfor, is to destabilize the Putin government internally and externally which would create chaos and lead to regime change in Moscow.

One significant method of external destabilization is the European Reassurance Initiative signed by Obama at the cost of $985 million. These monies are for Pentagon "projects" that include:

In early March the battles between the Ukrainian army and the pro-Russian self-defense forces in the east had largely stopped and heavy weaponry was being pulled back. The Minsk-2 cease-fire was then holding. At that same moment, US General Philip Breedlove, the top NATO commander in Europe, spoke to the media in Washington. Putin, Breedlove said, had once again "upped the ante" in eastern Ukraine by sending in Russian troops.

Der Spiegel reported that German leaders in Berlin were stunned. They didn't understand what Breedlove was talking about. The German government, supported by intelligence gathered from their own sources, did not share Breedlove's irrational view.

Related Topic(s): Capitalism; Climate; Intelligence; NATO; Oligarchy; Pentagon; Red-baiting; Regime Change; Russia And China; Stratfor; (more...) Ukraine, Add Tags  (less...)
Add to My Group(s)
Go To Commenting
The views expressed herein are the sole responsibility of the author and do not necessarily reflect those of this website or its editors.