Yeah, so, this is decidedly NOT new. CEOs are raking in vast riches yet again, using the usual confidence schemes they've used for a few decades. While inequality grows, it's still really, really good times in the CEO suite. 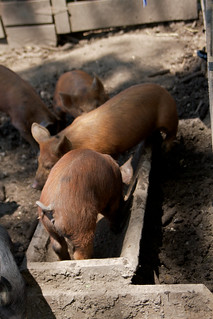 Pigs at the trough
(Image by Mike Miley)   Details   DMCA

At public companies with market values of more than $1 billion and that had filed proxies by April 30, the average package for the top 200 best paid chief executives was worth $22.6 million, trumping last year's average of $20.7 million, and the median was $17.6 million. Those are the highest amounts since Equilar began keeping track in 2006.[emphasis added]

The poor CEOs, they are just paupers compared to the hedge fund guys. Aren't we sad?:

However large, these pay packages do not represent the pinnacle of executive compensation. Hedge fund and private equity firm leaders can make not just tens of millions of dollars a year, but more than $1 billion.

The top 25 hedge fund managers took home a combined $11.62 billion last year, according to Institutional Investor's Alpha magazine, or nearly a half-billion dollars each. The top earner, Kenneth C. Griffin, the founder and chief executive of Citadel, brought home $1.3 billion. Private equity chieftains did nearly as well. Stephen A. Schwarzman of the Blackstone Group made $690 million last year, up from $450 million in 2013. (Hedge funds and private equity firms compensate executives through a mix of fees, carried interest and dividends, which are not calculated in Equilar's study.)

I never thought this whole obsession of forcing companies to disclose CEO pay relative to performance made much sense. Because this has very little to do with performance--it's a scam, an inside job. So this:

In theory, the momentum to rein in runaway pay continues. Dodd-Frank introduced new say-on-pay measures, allowing shareholders to express their discontent. The Securities and Exchange Commission is developing rules that would require companies to reveal the ratio of the chief executive's pay to that of average workers. And last month, the S.E.C. proposed requiring companies to disclose how performance affects executive pay.

If companies have to report C.E.O. pay that is 1,000 times that of the average worker or justify growing pay in spite of weak results, perhaps shame will kick in.

In the meantime, like an all-you-can-eat buffet for America's captains of industry, it seems there is no end to how much money executives can devour. For the first time, all 10 of the top-paid C.E.O.s on Equilar's list received at least $50 million last year.

And while much of the overall compensation came in the form of stock -- some of which vests over several years -- some chief executives received generous cash bonuses, a form of compensation that does little to incentivize long-term performance.[emphasis added]

A last point I'd make today. These greedy fucks justify this of course with this malarky:

Big pay has its defenders. "What does 'excessive' mean?" said Mr. Leider, the compensation consultant who advises companies on pay packages. "What somebody who works on the line considers excessive is different than what someone who has worked in management for 10 years considers excessive." The defense of these supersize salaries comes down to the idea that the executives, like celebrities, ought to be rewarded for their indispensable contributions. "Movie stars and sports stars get paid a lot for a very unique skill set," Mr. Leider said. "Some of these C.E.O.s have very unique skill sets."[emphasis added]

This is a complete myth. CEOs do not have "very unique skill sets". Most of what they do could be done by hundreds of thousands of people; most good community or union organizers I know could run any organization and any company.

The difference is CEOs made a choice to climb the ladder, ingratiating themselves to those above them and ultimately the board of directors which chooses a new CEO--and I suppose ass-kissing and playing golf with the right people and eliminating your internal competition is a unique skill set.

It's all about a club. And, then, when it comes to pay, it's all about that Club taking care of the other members of The Club--and that usually means handing over huge pay and benefits, at the expense of shareholders and certainly workers.

I've referenced this before when I've written about CEO greed. When I wrote my book "The Audacity of Greed" back in 2009, I had the good fortune to talk with Graef "Bud" Crystal who was once one of the country's premier compensation consultants--the guy who would be hired by CEOs to come up with compensation packages. He was there in the very first days of what would become a broad scam. He told me back then:

"In 1970, one CEO hired me and said, 'we don't have a bonus plan and do we need one?'" recalls Crystal. "I did the study and I went back to the CEO and said 'yes you do need a bonus plan. But we have a problem area. You are making $150,000-a year and the problem is that the $150,000 is equal to the salary and the bonus to what your competitors are paying so we have to cut your pay to $100,000-a-year and then we can put in a bonus.'" Crystal laughs. "It was like a scene from The Exorcist where ice formed on the windows"he started arguing about the findings and he finally said 'let me say this to you this way: who do you think is paying your bills anyway?' I replied, 'If I recall correctly the checks were drawn on the corporate account, not your personal account so the shareholders are paying me, not you.' The meeting ended quite quickly.

The point is the whole game is fixed. The CEO stacks his board with cronies, pays them $20,000-per-meeting board fees and, then, makes sure his cronies approve pay packages -- the real money is in the pensions and deferred pay.

It's a scam and has nothing to do with skills or "market competition".

Jonathan Tasini is the executive director of Labor Research Association. Tasini ran for the Democratic nomination for the U.S. Senate in New York. For the past 25 years, Jonathan has been a union leader and organizer, a social activist, and a (more...)
Related Topic(s): CEO AVARICE; CEO Wages; Inequality, Add Tags
Add to My Group(s)
Go To Commenting
The views expressed herein are the sole responsibility of the author and do not necessarily reflect those of this website or its editors.

It's Not Raining, We're Getting Peed On (II): The Scam of the Deficit Crisis

NOT BREAKING: CEOs Are Still Pigs At The Trough, Ripping Off Shareholders And Workers