GOP establishment protestations aside, Trump is simply Republican values without the filters. 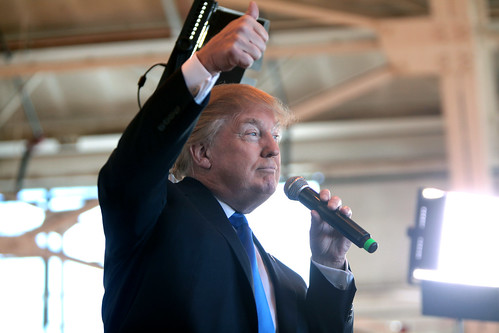 The headline for the lead New York Times editorial for August 21, 2016 was "Mr. Trump and the Damage Done." The Times used the Hindenburg Zeppelin disaster at Lakehurst, NJ in 1936 as an analogy. It of course expressed the hope that the polls are right, and will not change, and that Trump will go down to defeat, hopefully resoundingly. It went on to say:

"But while that will solve an immediate problem, a larger one will remain. The message of hatred and paranoia that is inciting millions of voters will outlast the messenger. The toxic effects of Trumpism will have to addressed."

The Times was right and The Times was wrong. Those "toxic effects" will have to be addressed (although The Times did not note why that would have to happen) alright. "Trumpism" is indeed a convenient name. But what The Times totally missed is that what Trump has been spewing is nothing new for the Republican Party. As is well-known, Trump has only disposed the dog whistles. As I have written on numerous occasions in the past, Trump has only further extended the "Rightward Imperative," the envelope of political speech that Repub. candidates have been expanding upon for years.

Indeed, as Jonathan Chait said in a recent column in New York Magazine (August 22-Sept. 4, 2016) entitled "Neocons at Large: Thirteen years after the bombing of Baghdad, the former GOP thought-leaders are now outcasts." He began the column by noting that:

"On February 29 [2016], Max Boot, a neoconservative columnist and then a foreign-policy adviser to Marco Rubio, wrote that if Donald Trump were to win his party's nomination, it would 'confirm everything bad the Democrats had ever said about the GOP.'"

Actually, unintentionally, both Mr. Chait and Mr. Boot have put their finger on a central problem for the Repubs. That the party really hasn't changed in its principles for many years. (The main Trump exception in content is that he went off the reservation a bit on foreign policy -- about which he appears to know even less than he knows about either domestic policy or what the U.S. government actually does and how it works. He does now seem to be wondering back.) As I have noted previously:

"For years to bring voters to their side [the Repubs.] have cloaked their real policy positions under the camouflage of: the standard, generally meaningless 'lower taxes, smaller government, etc.' mantra [smaller government, that is, except in matters such as freedom of choice in the outcome pregnancy and freedom of choice in what recreational mood-altering ('RMADs') to use], and the promotion of prejudice: racism, homophobia, religious bigotry, creationism, sexual repression, etc. If possible this was done in a supposedly veiled way, by using the so-called 'dog whistles.' They allow the GOP for the most part not to talk too much about what they are really about. And when they do, with the abundance of dog whistles about, their noise means that GOP voters hardly notice what their policies really mean."

It's just that Trump puts the one he likes out there at full bellow, and many party leaders don't like that. (For truly "full bellow," and I mean FULL, see esp. his Latino Eviction/Exclusion speech of August 31, 2016.)

On anti-immigrant ideology and policy, for example, as I have previously noted the Repubs. have had a strong strain of it since the party was founded in the 1850s. It was formed primarily from the Northern Whigs, but it did have a chunk of the strongly anti-immigrant American Party (along with the Temperance Movement) among its founding components. This has been expressed in legislation over the years, from the Chinese Exclusion Act of 1882, through the Immigration Act of 1924, which further excluded Asians, along with Southern and Eastern Europeans, and Jews, right down to the present functional illegalization of Latinos.

And of course the racism has been there since the nomination of Goldwater, one of whose claims to fame was that he had voted against the Civil Rights Act. Nixon's "Southern Strategy" and his "drug war," aimed particularly at people of color are well-known. McCain notably voted against making Martin Luther King Day a national holiday. And so on and so forth, in terms of policy and legislative emphasis (or rather non-emphasis) down to the present.

But now that its Presidential candidate has put away the dog-whistles for the Party, where indeed does it go from here? Does it backtrack a bit on domestic policy, especially on immigration? Maybe. (In fact there is a major struggle on this question going on within the Trump campaign at this time.) But just where else could it backtrack? Surely not on its primary goal, which is to essentially shut down all of the functions of the Federal government that it does not like, first and foremost in the regulatory arena.

So where do the Repubs. go from here? As is well-known, its base is shrinking. If it is ever to win another Presidential election, it is going to have to consolidate that base and firm it up (as well as expand gerrymandering and voter suppression -- Trump is already working loudly on this one). It needs the racist/anti-(non-white) immigration whites that Trump attracts. But it also needs to bring back the Right-wing homophobic/misogynist Christians put off by Trump for a variety of reasons. It also needs to solidify its "anti-government" ethic which Trump does not shout about too much.

So, assuming that Trump loses, where to turn? They won't want another ill-informed loudmouth. But they will want a solid reactionary thoroughly behind the whole of the real Repub. platform, who cannot only consolidate the base that Trump has assembled but who can also solidly bring the Christian Right back into enthusiastic support of the Party. 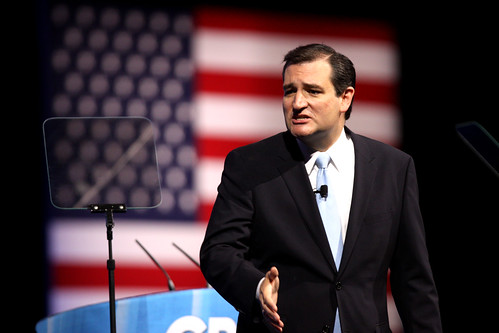 That candidate could very well be Ted Cruz, and I think that an early trial run for a Cruz candidacy is already underway. Even though Cruz is the most prominent Repub. to have not endorsed Trump and he did it very publicly, he (or at least some of "his people") is already making his move, actually through the Trump campaign itself. The latest leadership shift, which will most likely be the last, has, in case you didn't notice, put Cruz people in prominent places.

Start with the new Campaign Manager, Kellyanne Conway, actually a pollster, not a political director type. But she did some work for Ted Cruz. Then there's the new campaign chief, the notorious Steve Bannon from Breitbart, who supported both Trump and Cruz during the primaries. Of course the one real pro in the campaign, Paul Manafort, got caught with his boots muddied from the Dniester River (Ukraine), so he had to go. And anyway, Trump seemed to be tiring of the professional approach. Then there's the new big money man. It's one Robert Mercer, originally a Cruz supporter himself.

Steven Jonas, MD, MPH, MS is a Professor Emeritus of Preventive Medicine at StonyBrookMedicine (NY) and author/co-author/editor/co-editor of over 35 books. In addition to his position on OpEdNews as a "Trusted Author," he is a Senior Editor, (more...)
Related Topic(s): Donald Trump; Party Politics Republican; Republican Sabotage; Ted Cruz, Add Tags
Add to My Group(s)
Go To Commenting
The views expressed herein are the sole responsibility of the author and do not necessarily reflect those of this website or its editors.