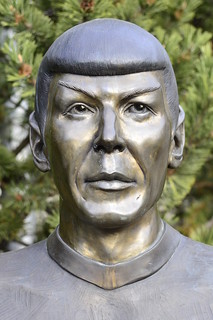 The tributes to Leonard Nimoy that have filled newspaper front pages and television broadcasts since his death Friday have begun to reveal a measure of the man's remarkable reach, which extended far beyond his development of perhaps the most enduring and beloved character in modern science fiction.

He was a dedicated artist who acted on stage and screen, directed plays and films, wrote poetry and earned praise for his photography; a generous donor to the arts and many causes; a proud Screen Actors Guild-American Federation of Television and Radio Artists (SAG-AFTRA) member; and an early champion of diversity and pay equity -- as was revealed in recent reports on how Mr. Spock advocated for equal pay for Lt. Uhura (actress Nichelle Nichols).

So perhaps it will not come as a surprise that, at the height of his initial fame, Nimoy was an ardent McGovern man.

George McGovern's anti-war candidacy for the presidency in 1972 attracted a good deal of celebrity support. But few Hollywood figures worked as hard as Nimoy to advance the cause of the Democratic presidential contender.

Beginning in January of 1972, when he trekked to New Hampshire on behalf of what was then considered to be McGovern's uphill battle for the nomination, Nimoy traveled to 35 states on the South Dakota senator's behalf. Grainy photos and news reports from more than four decades ago tell the story of a young Nimoy campaigning in the southwest with Latinos, in urban centers with African Americans, in rural Oregon and even in Alaska.

Nimoy did not mind trading on his "Star Trek" celebrity to appeal for McGovern. He even joked at campaign stops that, "I'm at a disadvantage. I've spent most of my previous life on Vulcan, so I don't know too much about the people in this country."

But, of course, he did know a lot about the country and its politics. Referencing infant mortality rates and poverty issues in a land of plenty, he declared that, "We don't need another campaign that avoids these issues, another nice guy campaign."

On the campaign trail, Nimoy spoke against not just the war in Vietnam but against bloated Department of Defense budgets and misguided priorities. He decried the influence of Henry Kissinger on the Nixon administration and fretted that it was undermining traditional diplomacy. He condemned the Watergate break-in and complained about win-at-any-cost politics.

Nimoy drew crowds, and attention, for the campaign -- even if, as he explained to an interviewer years later, some McGovern aides might have thought of Mr. Spock as a slightly "alien" surrogate. Part of what made Nimoy effective as a campaigner was his steadfast refusal to play the star. In Wyoming, McGovern campaign organizer Barbara McKenzie recalled, "Leonard Nimoy went out to the caucus and helped set up chairs."

Asked by an Alaskan television interviewer if he thought it was fair to use his celebrity status to "boost" McGovern, Nimoy replied, "I think it's about as fair as Ronald Reagan running for governor of California based on the fact that he's done some movies... I try very hard to avoid asking people to vote for George McGovern simply because they like me. I try to present some specific information, I try to be very much in touch with the issues so that I can give an intelligent accounting of the candidate -- rather than to just do it on a celebrity basis."

While McGovern won the Democratic nomination -- helped along by delegates won in a number of western states where Nimoy was an ardent campaigner--he was soundly defeated in that fall by Richard Nixon. Nimoy headed back to LA and his acting career. There are old pictures of him holding "Mr. Spock for President" bumper stickers. But, unlike another "Star Trek" veteran who was politically active in 1972, George Takei (Lt. Sulu) -- who narrowly lost a 1973 Los Angeles city council race and later considered seeking a seat in the California legislature -- Nimoy steered clear of electoral politics.

As campaign slogans go, it would be hard to top "Live Long and Prosper."

Related Topic(s): Issues; Leonard Nimoy; Politics, Add Tags
Add to My Group(s)
Go To Commenting
The views expressed herein are the sole responsibility of the author and do not necessarily reflect those of this website or its editors.