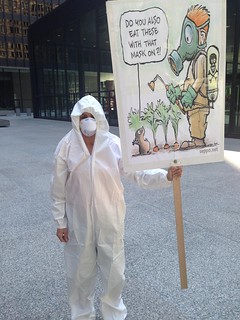 
Last week, while we waited for the U.S. Environmental Protection Agency (EPA) to announce whether or not the agency will give Monsanto's Roundup a free pass by green lighting the use of glyphosate for another 15 years, the EPA's counterpart in the EU made its own big announcement.

Glyphosate is "unlikely to cause cancer" said the authors of the new report by the European Union Food Safety Authority (EFSA).

That headline, music to Monsanto's ears, seemed to fly in the face of the findings published earlier this year by the World Health Organization (WHO). After extensive review of the evidence, all 17 of WHO's leading cancer experts said glyphosate is a "probable human carcinogen?"

Sustainable Pulse (SP), publisher of global news on GMOs and other food-related issues, quickly reported the glaring omission made by the majority of news sources reporting on EFSA's findings.

According to SP, what EFSA really concluded is this: Glyphosate by itself doesn't cause cancer. But products like Monsanto's Roundup, which contain glyphosate and other additives and chemicals that are essential to making the herbicide work? That's another, or in this case, the rest of the story.

According to the EFSA report:

It is likely, therefore, that the genotoxic effects observed in some glyphosate-based formulations are related to the other constituents or "co-formulants."

Independent scientists have long warned that pesticides are authorized for use based on medium- or long-term tests on laboratory animals carried out with a single chemical ingredient, which is known as the active ingredient because it is assumed to be responsible for giving the pesticide its pest- or weedkilling action.

However, the complete pesticide formulations as sold and used also contain additives (adjuvants), which increase the pest- or weedkilling activity of the pesticide. These complete formulations do not have to be tested in medium- and long-term tests -- even though they are the substances to which farmers and citizens are exposed.

That would explain the difference between EFSA's conclusion, based on its assessment of glyphosate alone, and the WHO findings, based on studies of glyphosate in combination with the other additives .

EFSA's statement, and strong warning to EU member states that they might want to take a closer look at the whole toxic enchilada before they draw their own conclusions about glyphosate and Roundup, was anything but music to Monsanto's ears. Because EFSA's findings could, and should, change the way agencies like the EPA and EFSA study the toxic effects of herbicides.

We checked in with Andre Leu, author of the "Myths of Safe Pesticides," for his take on the EFSA report.

"No surprise," said Leu, who told us he's devoting a whole chapter in his new book to how the pesticide industry has corrupted EFSA and the EPA. "I'll reveal the background on how Monsanto's 'Glyphosate Task Force' wrote the EFSA glyphosate reassessment report almost word for word to justify lifting the residue limits."

Katherine Paul is associate director of the Organic Consumers Association.

Related Topic(s): European Union; Genetically Modified Food GMO; Glyphosate; Monsanto; Roundup Weedkiller, Add Tags
Add to My Group(s)
Go To Commenting
The views expressed herein are the sole responsibility of the author and do not necessarily reflect those of this website or its editors.

Who Should Clean Up Big Ag's Mess?

Congress Must Investigate Collusion Between Monsanto and the EPA, Now