This text is the foreword to a new book by Pat Elder called Military Recruiting in the United States. 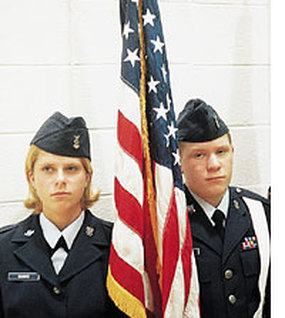 Most people in the United States are far from aware of the full extent of military marketing, advertising, and recruitment efforts. We run into movies and comic books and video games and toys and school worksheets and science fairs and television shows and websites all the time that have been funded by and created in collaboration with the U.S. military. But we don't know it. Or we know it, but we have so internalized the idea that the most expensive and extensive military the earth has ever known is simply normal, that we don't think of its role in our educational and entertainment systems as in any way questionable. We don't even think of the military's marketing as being aimed at recruitment, much less ask each other whether that's a good thing or being done in a proper way, or whether we ourselves should be forking over some $600 million a year just for the military's advertising budget.

Even more people are unaware of the work of counter-recruiters, of individuals and organizations that work to increase awareness of military recruitment and to counter it with inconvenient information -- that is, information that may be inconvenient to recruiters but highly useful to potential recruits. Counter-recruiters bring veterans into schools to talk about their regrets. Counter-recruiters warn young people of the dangers of false promises and of contracts that will be binding only on them, not on the military. Counter recruiters lobby for policy changes that prevent the military from obtaining information on students without parental consent.

Sometimes -- very rarely -- counter-recruiters write outstanding books that inform us of the current state of affairs and guide us toward paths for engagement with their work. Pat Elder is a counter-recruiter turned author, and we are all in his debt. This book makes clear the need for counter-recruitment, and it provides the tools to expand it.

Why is counter-recruitment appropriate even when there is no draft, the military is all volunteer, and many people reading this book have never been pressured to enlist at all? Well, 99% of us in the United States are asked only to pay taxes for wars, vote for war architects for public office, tell pollsters we support wars, and tolerate war promotion throughout our culture. Nothing more is asked of us. But what about that other one percent? Our tax dollars don't fund a dime's worth of pro-peace propaganda for them. Despite warnings of health threats from the American Medical Association, military recruiters do not, like cigarette or alcohol marketers, have to provide the slightest shred of warning regarding the risks involved. They also are permitted to market to younger people than are the marketers of cigarettes and alcohol. As Elder points out, in most U.S. states you must be 21 to drink alcohol and 25 to rent a car, but at 18 you can kill or die in war.

Explaining the heavy, one-sided push experienced by targeted young men and women, disproportionately in low-income communities, to those who haven't experienced it, is like trying to explain predatory mortgage loans that push the borrower to default in order to collect more fees to someone who's only ever encountered banks that hoped their loans would be paid back. If you doubt the reality of aggressive recruitment, that's not your fault. But you won't doubt it after you read this book.

Counter-recruiters don't make any promises to anyone, though they may try to help young people find peaceful careers. They don't ask anyone to sign a contract to remain peaceful for six or eight or an infinite number of years. They don't secretly receive detailed data on students without their knowledge in order to better target them for counter recruitment. If we are to truly think of those who enlist in the U.S. military as volunteers, we are required to make sure they have accurate information. Volunteering on the basis of insufficient or misleading knowledge is not volunteering at all. Counter-recruitment, then, is not something to tolerate, but something to insist upon.

One of the first things a counter-recruiter, and this book, will make clear, is that even a well-informed volunteer in the U.S. military, unlike any other volunteer in any other enterprise, is not permitted to cease volunteering. Even when a contract expires, the military can extend it indefinitely. Before it expires, the recruit cannot end it without risk of a dishonorable discharge and/or prison, and the recruit-- by the terms of the contract--lacks basic Constitutional rights that he or she is often told the wars are fought to somehow defend. The risks haven't stopped tens of thousands of people from deserting the U.S. military in recent years as soon as they discovered that, like most things, the military does not really resemble its television commercials.

War participation, unlike in the movies, does not come easily in real life. It takes intense conditioning to get most people to kill other human beings, and most people have a hard time recovering from having done so. This is great news for humanity, but bad news for veterans. The top cause of death in the U.S. military is suicide, and the suicide rates far exceed those for civilians. As Elder reports, some 45% of U.S. veterans of Iraq and Afghanistan have filed injury claims, and some 25% have sought mental health treatment through the Veterans Administration. About 26,000 sexual assaults occurred within the U.S. military in 2012. Some states are working to eliminate veteran homelessness. This is an indication of the normalization of war in a society in which at some point in the future all homeless people could be non-veterans. It is also an indication of the fact that veterans for many years have been far more likely than non-veterans to lose all means of subsistence. "Support the troops" bumper stickers don't actually pay anybody's rent.

On June 12, 2016, the New York Times ran an article that reported that "modern warfare destroys your brain." This was a reference to newly understood physical evidence of the damage done by being near explosions. If this were the National Football League you might expect a movie like Concussion to dramatize the problem. This being the military, which-- by the way-- pays the NFL with our money for most of the war hype at football games, one must rely on counter-recruiters to spread the word.

There are two major ways in which war destroys your brain, one of them long predating modernity, and both of them serious, real, and tragic whether neuroscientists have figured out what they look like under a microscope or not. In addition to the trauma of explosions, a participant in war faces the trauma of morality, the pain of facing hatred and violence, the agony of threatening and inflicting hatred and violence -- aggravated in many cases by the weakness of belief in the cause. Once you join up, you're not asked to kill in only the wars you believe in. You're asked to obey without thinking at all.

In an end-of-year worldwide poll in 2014, Gallup asked people in dozens of countries whether they would be willing to fight in a war for their country. The results were encouraging, with some countries listed at only 10% or 20% willing to join in a war. The United States, at 44% willing to fight in a war, was quite high -- though not the highest -- by comparison. But people surveyed by Gallup covered the full age range of adults, and most of those years are above recruitment age. Most of those years are years in which you cannot enlist even if you want to. This poll was conducted at a time when the United States had multiple wars underway and had for many years. Why would people claim that they "would" fight in a war, when clearly they would not? Why would the National Rifle Association produce a video with an elderly musician, Charlie Daniels, encouraging warmongering toward Iran? I think a lot of people like to imagine themselves at war from the safety of their backyards. But in doing so, they fuel a culture that encourages young people to sign up without thinking it through. In the words of Phil Ochs:

It's always the old to lead us to the war
It's always the young to fall
Now look at all we've won
With the saber and the gun.
Tell me, is it worth it all?

I've met many veterans who signed up imagining they'd be global policemen and rescue workers, who discovered they were global pirates and snipers. Many of the most dedicated peace activists in the United States were once among the most enthusiastic recruits in the military. Many of them would not have been recruited had they had more information and other options. Many would not have been as attracted to Donald Trump's "steal their oil!" and "kill their families!" as they were to pretenses of defense or humanitarianism.

Polls have found that a majority of recruits say the lack of other career options was a major factor in their joining up. This is why one of the most indirect but powerful means of countering recruitment is to increase access to jobs or college. A "volunteer" military in a full-employment society with free college and job training would be far more significantly volunteer.

There are, of course, many sorts of peace activism, including education, demonstrations, protests, civil disobedience, citizen diplomacy, and so on. I engage in all of these and support them. But one major form of peace activism in need of expansion is counter-recruitment. It's a means of working locally, something that has greatly benefitted the environmental movement. It's a means of working face-to-face with people. It's a means of achieving immediate personal successes. When you help one young person stay out of the military, you know that you have done good work.

David Swanson is the author of "When the World Outlawed War," "War Is A Lie" and "Daybreak: Undoing the Imperial Presidency and Forming a More Perfect Union." He blogs at http://davidswanson.org and http://warisacrime.org and works for the online (more...)
Related Topic(s): Military Spending; Military Spending, Add Tags
Add to My Group(s)
Go To Commenting
The views expressed herein are the sole responsibility of the author and do not necessarily reflect those of this website or its editors.