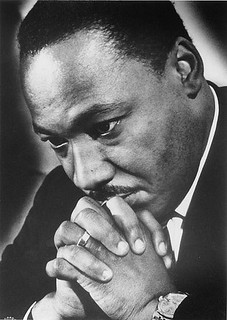 King was an American civil rights leader who was assassinated 47 years ago on April 4, 1968, at the age of 39. James Earl Ray was blamed for the murder. Initially, Ray admitted the murder, apparently under advice from his attorney in order to avoid the death penalty, but Ray soon withdrew his confession and unsuccessfully sought a jury trail.

Documents of the official investigation remain secret until the year 2027.

As Wikipedia reports, "The King family does not believe Ray had anything to do with the murder of Martin Luther King. ... The King family and others believe that the assassination was carried out by a conspiracy involving the U.S. government, and that James Earl Ray was a scapegoat. This conclusion was affirmed by a jury in a 1999 civil trial against Loyd Jowers and unnamed co-conspirators."

The US Department of Justice concluded that Jowers' evidence, which swayed the jury in the civil trail, was not credible. On the other hand, there is no satisfactory explanation why documents pertaining to the investigation of Ray were put under lock and key for 59 years.

Certainly, the government should not have fomented suspicion by settling such a high profile murder with a plea bargain. Ray was an escapee from a state penitentiary and was apprehended at London's Heathrow Airport on his way to disappear in Africa. It seems farfetched that he would imperil his escape by taking a racist-motivated shot at King.

We should keep in mind the many loose ends of the Martin Luther King assassination as we are being bombarded by media with what Finian Cunningham correctly terms "high-octane emotional politics that stupefies the public from asking some very necessary hard questions" about the Charlie Hebdo murders, or for that matter the Boston Marathon Bombing case and all other outrages that prove to be so convenient for governments.

Those gullible citizens who believe that "our government would never kill its own people" have much understanding to gain from knowledge of Operation Gladio and Northwoods Project, about which much information is available on the Internet and in parliamentary investigations and officially released secret documents.

The Northwoods Project was presented to President John F. Kennedy by the US Joint Chiefs of Staff. It called for shooting down people on the streets of Washington and Miami, shooting down US airliners ("real or simulated"), and attacking refugee boats from Cuba in order to create an atrocity case against Castro that would secure public support for a full-fledged invasion to bring regime change to Cuba. President Kennedy refused the plot and removed the Chairman of the Joint Chiefs, an action that some researchers conclude led to his assassination.

Operation Gladio was revealed by the prime minister of Italy in 1990. It was a secret operation coordinated by NATO and operated by European military secret services in cooperation with the CIA and British intelligence.

Parliamentary investigations in Italy, Switzerland, and Belgium and testimony by secret service operatives have established that Gladio, originally established as a "stay-behind" secret army to resist Soviet invasion, was used to commit bombing attacks on Europeans, especially women and children, in order to blame communists and keep them from gaining political power in Europe during the Cold War era.

In answer to questioning by judges about the 1980 bombing of the central train station in Bologna resulting in the deaths of 85 people, Vincenzo Vinciguerra said: "There exists in Italy a secret force parallel to the armed forces, composed of civilians and military men ... a super-organization with a network of communications, arms and explosives [which] took up the task, on NATO's behalf, or preventing a slip to the left in the political balance of the country. This they did, with the assistance of the official secret services and the political and military forces."

Vinciguerra told the UK newspaper, The Guardian, that "every single outrage that followed from 1969 fitted into a single, organized matrix ... mobilized into the battle as part of an anti-communist strategy originating not with organizations deviant from the institutions of power, but from within the state itself, and specifically from within the ambit of the state's relations within the Atlantic Alliance."

Related Topic(s): Conspiracies; Martin Luther King; Media, Add Tags
Add to My Group(s)
Go To Commenting
The views expressed herein are the sole responsibility of the author and do not necessarily reflect those of this website or its editors.