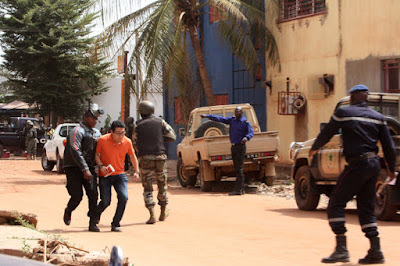 Another horrific jihadi attack today, this time on a Radisson Blu hotel in Mali. 27 killed. Here's an excerpt from the New York Times coverage:

Mali has been crippled by instability since January, 2012, when rebels and Al Qaeda-linked militants -- armed with the remnants of late Libyan leader Col. Muammar el-Qaddafi's arsenal -- began advancing through the country's vast desert in the north and capturing towns.

In other words, the jihadi gangs in Mali are a direct result of American/French/NATO regime change in Libya, executed by the Obama administration, spearheaded by "We came, we saw, he died" Hillary Clinton.


In 2010, Libya under Ghaddafi had the highest standard of living of any country in Africa (UN Human Development Index). Ghaddafi's Libya employed many Malians. It was an anchor of stability in North Africa. The US/France/NATO put an end to that, under entirely phony pretexts, against fundamental international law, and in violation of the UN resolution they claimed as a justification. The executioners and beneficiaries of that US/France/NATO strategy where the jihadis who shoved a stick up Ghaddafi's ass and are now rampaging throughout Mali.

Ha, Ha. Maybe she can get a gig at the Comedy Club in the Radisson.

Amazing, isn't it, that so many self-proclaimed secular non-Muslim Americans have, from their lofty vantage point, supported the Hillaries and Obamas and Sarkozies of the world in devastating three of the most secular, most non-sectarian, most educationally and socially-advanced -- especially for women! -- countries in the Middle East (Iraq, Libya, Syria)? Even more amazing is that these Americans somehow now feel that it's appropriate to demand that every member of the "Muslim community" take responsibility for every jihadi atrocity that America has spawned. Ha, indeed.

Lessons, to anyone not blinded by American exceptionalism, including the equal-opportunity strain thereof:

Related Topic(s): Hillary Clinton; Hillary Clinton; Isis; Jihadists; Libya Revolution; Mali; Syria; Terrorism; Terrorism In Africa, Add Tags
Add to My Group(s)
Go To Commenting
The views expressed herein are the sole responsibility of the author and do not necessarily reflect those of this website or its editors.