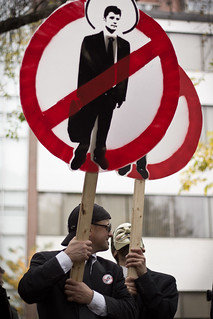 Corporate Greed
(Image by luccast85)   Details   DMCA
rporations are taking the retirement savings of elderly public employees and using them to inflate their stock prices so wealthy CEOs and their shareholders can enrich themselves at the expense of their companies. And it's all completely legal. Under current financial regulations, corporate bosses are free to repurchase their own company's shares, push stock prices into the stratosphere, skim off a generous bonuses for themselves in the form of executive compensation, and leave their companies drowning in red ink.

Even worse, a sizable portion of the money devoted to stock buybacks is coming from massively underfunded public pension funds that retired workers depend on for their survival. According to Brian Reynolds, Chief Market Strategist at New Albion Partners, Pension funds have to make 7.5%, so they are putting their money in these levered credit funds that mimic Long-Term Capital Management in the 1990s. Those funds, in turn, buy enormous amounts of corporate bonds from companies which put cash onto company balance sheets and they use it to jack their stock price up, either through buybacks or mergers and acquisitions It's just a daisy chain of financial engineering and it's probably going to intensify in coming years. (How a Public Pension Crisis Is Driving an Epic Credit Boom, Financial Sense)

So, once again, ordinary working people are caught in the crosshairs of a corporate scam that could blow up in their faces and leave them without sufficient resources to muddle through their retirement years.

The amount of money that's being funneled into buybacks is simply staggering. According to Dave Dayen at the Intercept:

"Returning profits to shareholders through buybacks and dividends accounted for 95 percent of all earnings in 2014. As a result, each additional dollar of corporate earnings now translates to under 10 cents of reinvestment, according to a study by J.W. Mason of the Roosevelt Institute." (SEC Admits It's Not Monitoring Stock Buybacks to Prevent Market Manipulation, Dave Dayen, Intercept)

This explains why business investment (Capex) is at record lows. It's because the bulk of earnings is being recycled into buybacks, over $2.3 trillion dollars since 2009 to be precise. And it's all connected to the Fed's zero rate policy. Zero rates have created an environment in which corporations no longer look for ways to grow their businesses, expand operations, hire more employees or improve productivity. Instead, they look for the quick fix; that is, load up on debt, buy more shares, goose the stock price, and walk away with a bundle.

It's all about incentives. The Fed has created incentives that encourage financial engineering and stock manipulation as opposed to growth and productivity. And keep in mind that repurchasing shares is a form of margin buying, the same type of margin buying that triggered Stock Market Crash of 1929.

According to Dayen: Prior to the Reagan era, executives avoided buybacks due to fears that they would be prosecuted for market manipulation. But under SEC Rule 10b-18, adopted in 1982, companies receive a safe harbor from market manipulation liability on stock buybacks if they adhere to four limitations.

We won't go over the regulations now because, as you can see, they obviously don't work or these corporations wouldn't be $2 trillion in the hole. But it is interesting to note that, at one time, policymakers saw how destructive buybacks were and were prepared to prosecute offenders for manipulation. I doubt that any of our regulators today would even dream of bringing a case against these corporate behemoths, after all, they pretty much own the whole show lock, stock and barrel.

The real danger of this buyback phenom, is that the corporations have piled on so much debt that any sharp decline in the market could push one or two of these giants into default. That, in turn, could quickly take down other counterparties touching off another financial crisis. So, the question regulators should be asking themselves, is how much red ink are these corporations hiding on their balance sheets and what are the risks to the public if they are unable to repay their debts. According to Henry Blodget at Business Insider:

"As corporations have borrowed more and more money, the level of corporate debt relative to the size of the economy has continued to increase. As the chart below shows, this ratio is now at its highest level ever even higher than it was in 2007, before the last debt-fueled economic implosion. Importantly, corporate net debt the amount of debt that corporations are carrying minus the cash they have on hand (green line below) is also at its highest level ever as a percent of the economy." (Now It's Time To Think About What Will Happen When Companies Stop Buying Back So Much Stock, Business Insider)

Related Topic(s): Buybacks; Corporate; Financial; Markets, Add Tags
Add to My Group(s)
Go To Commenting
The views expressed herein are the sole responsibility of the author and do not necessarily reflect those of this website or its editors.