It would take only a few hundred nukes to kill almost all the people on earth, who live on 12% of the landmass. The US has more than enough to annihilate humanity many times over.....more nukes does not mean more safety but more risk.

"A recently declassified document shared by nuclear historian Alex Wellerstein gives the verdict that scientists at the Los Alamos laboratory and test site reached in 1945. They found that "it would require only in the neighborhood of 10 to 100 Supers of this type" to put the human race in peril."

Today's bombs are incredibly more lethal. North Korea has deterred attacks with only a handful of nukes, but enough to wipe out Seoul and Tokyo. The beneficiaries of more nukes is the military/industrial complex which trades the risk of annihilation for more profits.

War is a racket (Smedley Butler).Never forget that essential fact.

The CBO has been banned from making a cost estimate on the Nuclear Modernization Act, meaning a blank check for the merchants of death. In all other nuclear nations, nuclear capacity will be increased as a response to an obvious threat.

As a Chrismas present to the world, a few days ago, a man not yet President and lacking popular support, brought into focus the threat of nuclear annihilation in one tweet: "Let it be an arms race."

This was in response to the game of ego-driven chicken he was playing with Putin who had warned that Russia could not be defeated with nuclear threats, from NATO, the US, or anywhere. I decided to look into the scale of the terror that Trump has unleashed, as tho waking up from one of the recurrent nightmares of my youth that indeed, nuclear war had started. Below I explore the scale of the threat and the rationality of the fear.

One current nuclear bomb has the force of 15,000 kilotons, compared to the bomb dropped on Hiroshima, which had 15.

Why would anyone in his right mind think it makes sense to have more capacity?

Here is the kind of "defense" that Trump supporters are promoting (from OEN discussion forum): "These statements about upgrading nuclear arsenals could be jockeying for eventual arms reduction negotiations."

This brings to mind Einstein's insight that "You cannot simultaneously prevent and prepare for war." 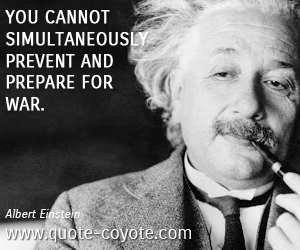 Against this insight is the Nixon Madman Theory which Trump has adopted: "I call it the Madman Theory, Bob (Haldeman) . I want the North Vietnamese to believe I've reached the point where I might do anything to stop the war. We'll just slip the word to them that, "for God's sake, you know Nixon is obsessed about communism. We can't restrain him when he's angry--and he has his hand on the nuclear button" and Ho Chi Minh himself will be in Paris in two days begging for peace."

Related Topic(s): Fear; History; Insanity; Intimidation; Irrational; Nightmare; Nukes; Treaty; Trump Idiot-in-chief; Trump Supporters; (more...) World War Three, Add Tags  (less...)
Add to My Group(s)
Go To Commenting
The views expressed herein are the sole responsibility of the author and do not necessarily reflect those of this website or its editors.