The Left as "Born to Lose" Heart Surgeons

Something seriously ails America's political Left. Perhaps it's best summarized by a popular joke. You've probably heard it: "You know you're in trouble when your heart surgeon's got a Born to Lose tattoo." There's compelling reason to think our political Left is very much like that heart surgeon, leaving "little left" but prayers for our moribund body politic. 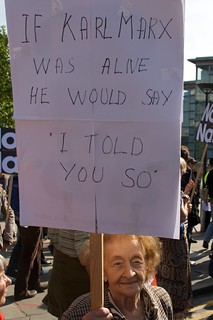 If Karl Marx was alive... if Leftists are smart, he's not dead yet.
(Image by BinaryApe)   Details   DMCA

If we take Naomi Klein seriously (and sadly, not even Klein herself, in failing to push for Leftist candidates, consistently does), we have good reason to liken the political Left to a heart surgeon. Why? Because skilled, forceful intervention by the political Left is probably the only thing that can save not just our nation, but the entire planet, from climate death. Now "climate death" is perhaps an exaggeration, but there's nothing exaggerated in the prospect of an unprecedented global catastrophe--an Armageddon scenario--costing tens of trillions of dollars and, at minimum, hundreds of millions of lives. For everyone deeply attuned to the latest findings of climate science, that prospect is all too real, and certainly grave enough to liken any group poised to stave it off to a heart surgeon. Such is our "born to lose" Left, in whose fumbling surgical fingers--perhaps unbeknownst to itself--the very future of humanity resides.

Now, why is the Left the indispensable surgeon? Because, as Klein convincingly argues in This Changes Everything, only the Left's firm belief in democratic government as agent of the common good is adequate to our climate emergency. Only such governments, acting on behalf of the common good, can rein in the lawless, polluting corporate behemoths, negotiate and enforce the needed global cooperation, and command and facilitate the expensive, currently inconvenient changes from a fossil fuel lifestyle everyone will need to make.

Though she's hardly the first, Klein has compared the shared effort and sacrifice required to stave off climate fiasco to mobilization for a major war--a mobilization that will be needed in every nation. And just as in a major war effort, a crucial role of government will be to ensure that the required effort and sacrifice is fairly shared: both between the rich and poor of any given nation, but also between the richer and poorer nations of this globe. In the latter case, this means requiring that the world's most prosperous nations, who, as vehicle to their prosperity, have been the worst fossil fuel polluters, aid the world's poorer nations in providing a path to decent, modern well-being that doesn't depend on fossil fuels. Only governments, by easing and fairly distributing the required effort and sacrifice, can ensure the worldwide buy-in and compliance essential to a global transition from fossil fuels to renewable energies. Considering the unprecedented scale of essential climate action, it seems a "no-brainer" that only concerted command-and-control policies, in the hands of democratic governments seeking the common good, can bring it off.

What makes this all extremely scary, as Klein likewise points out, is that when a forceful political Left is most needed, the global Left is at its most impotent. Above all, this reflects the worldwide triumph of free-market ideologies; in fact, the "free market" (in practice it's often anything but) was winning ideological control over societies and governments at a time when, among professional economists, it was receiving its harshest, most probing critiques--resulting in Nobel Prizes for some of the most critical. But as Marx lastingly demonstrated, ideologies (as opposed to science theories) do not gain currency based on their intellectual merits, but by providing unjust legitimacy to existing power relations--in our day as in his, to domination of societies by the capital-owning rich. Economist Thomas Piketty's surprise bestseller, Capital in the Twenty-First Century, shows just how much, despite a whirlwind of societal and technological changes, the domination of capital is again approaching what it was in Marx's lifetime. Unsurprisingly, capital's reassertion of dominance has been accompanied by the ideological stilling--indeed the disrepute and virtual nonrepresentation--of even moderate voices from the political Left. A development documented (and deeply lamented) by Chris Hedges in his book The Death of the Liberal Class and by Adolph Reed in his provocative Harpers essay "Nothing Left."

Both Hedges and Reed forcefully corroborate Klein's case that the Left has "gone limp" when it needs to be its most assertively virile. But I wish to focus on Reed in particular, since his own argument, though fairly pessimistic, offers a promising clue as to the how the Left can reassert its needed manhood. And paradoxically, the path to Leftist "manliness" lies in electing a woman, Elizabeth Warren, as U.S. president.

See, Reed makes the case that Democrats, gradually backing off from their traditional economic defense of the middle class, working class, and poor in the face of all-triumphant free-market ideology, found their electoral stock--and their own new identity--in "identity politics." Siding with the (largely noneconomic) rights assertions of women, gays, blacks, and Hispanics, they became stalwart champions of such issues as abortion, gay marriage, affirmative action, and (at least for a time) liberal immigration policy. Now, my point (like Reed's) is not that Democrats were necessarily wrong to embrace these issues, but how much they lost--even for the "identity" constituencies in question--by abandoning their Leftist stands on pocketbook issues. To fully write the story of plutocrats' "hostile takeover" of our society and government, it's absolutely essential to explain how Democrats not only condoned but actively abetted that takeover. Just as examples, Bill Clinton's support for NAFTA and the repeal of Glass-Steagall, or Obama's support for "NAFTA on steroids" trade deals like TTP and TTIP and his endless Wall Street cabinet appointees, are easy to cite. Alone, the constant decline in the purchasing power of the federal minimum wage, since the 1980s, illustrates how little Democrats have been on the economic job.

By stupidly forgetting--or wussily repudiating--Marx, Democrats have sacrificed the well-being of their traditional constituencies, even their identity "ones." And, to the extent Democrats had been the sole effective voice of the Left in our two-party system, they've thereby helped brand Leftists with our Born to Lose tattoos. For Marx's indispensable heritage, which more than compensates for his failures to "handicap" history, is his central insistence that economic (and relatedly, power) relations are at the heart of everything, and that where capital is allowed to accumulate without check, it will inevitably exploit those without capital, just as inevitably making government its ally in that exploitation. A powerful, subversive message--one that's really at the heart of human liberation. A message that even Catholic liberation theologians insightfully embraced, as closely related to the core message of Jesus Christ.

And now Democrats, jarred by voter disaffection, offer (as rising party star if not yet candidate) Elizabeth Warren, an ardent preacher of that subversive message. And Warren, as a woman, provides the perfect bridge from Dems' days of identity politics to a return to their economic core. As that bridge, and with her subversive message, Warren is the ideal WEDGE for the Left to reassert its grip on politics and, perhaps to extent never before seen, exert its political muscle. See, after electing our first black president, electing a woman to that high office is perhaps the last piece of unfinished business for identity politics--a desirable, long-overdue move all enlightened souls should embrace. But at a time when the Left's return to power is urgent, it's crucial that that woman be a voice of the Left, and not some gender-correct Trojan horse for reactionaries like Hillary Clinton. Enter Elizabeth Warren, who duplicates and thereby annuls the Hillary Clinton's only legitimate attraction. And who preaches the Left's core economic message (while showing unprecedented promise of effective climate action) to boot.

That Tattoo Again: Ditching the Good for the Bad and the Ugly

Now, with all her promise, Warren is admittedly not the perfect Leftist; outside her economic (and increasingly, climate) bailiwick, Warren has shown signs of a hawkishness and blind support for Israel that are, lamentably, parts of the Beltway's "Deep State" consensus. But just as Warren, once a "one-trick pony" on economics, has now seen the link between climate action and her core economic concerns, it's entirely conceivable (as it is not with Hillary Clinton), that she can be made to see the close links tying peace issues to economic justice and climate action as well. Naomi Klein, who beautifully spells out those links, should not only be supporting Warren, but trying to get her ear.

If everything depended solely on Warren's learning curve (especially seeing the ceaseless "Deep State" pressure she'll be under), the Left, rightly feeling snookered by Democrats, might reasonably deny her their support, despite the vast trumps she offers. But in doing so, they would forget what's most crucial to their own purposes: the sheer subversiveness of Warren's economic message. In preaching the rights of Main Street against Wall Street, Warren is not letting just any cat out of the bag, but a virtual "king of the jungle," a lion beyond her control. One effect of raising people's economic hopes is to raise their overall level of hope and, consequently, their sheer cussed willingness to make demands. Alexis de Tocqueville rightly noted that sentiment for the French Revolution began building after economic conditions had considerably improved in France. By raising popular consciousness and hopes, Warren could well be the Left's entry wedge to fomenting a type of peaceful "permanent revolution"--with luck, one enacting the deeply alluring climate justice agenda sketched by Naomi Klein.

Knowing economics is the core of everything, the Left should trust deeply in the sheer subversiveness of Warren's economic message, if not necessarily in Warren herself. Indeed, the same movement that pressures Democrats to dump Clinton for Warren should ceaselessly pressure her to be better, evolving, if need be, into "Warren's worst nightmare"--part of the troublesome "big cat" she unwittingly let out of the bag. Warren's potential candidacy is a historic opportunity for the Left. Full knowing the alternative is not some perfect Incarnation of Divine Justice--but presidential cave dwellers like Clinton or Bush accelerating the demise of democracy and climate--we'll richly deserve our Born to Lose tattoos if we fail to seize it.

Related Topic(s): Class; Climate; Economic; Exploitation; Government; Identity; Leftist; Liberation; Marx; Message; (more...) Peace; Politics; President; Revolution; Warren-Elizabeth; Wedge Issues, Add Tags  (less...)
Add to My Group(s)
Go To Commenting
The views expressed herein are the sole responsibility of the author and do not necessarily reflect those of this website or its editors.