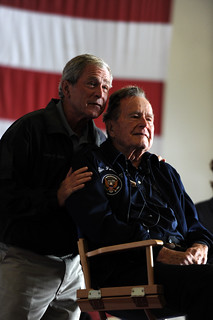 "So why was the success of the surge followed by a withdrawal from Iraq, leaving not even the residual force that commanders and the joint chiefs knew was necessary? "

Apparently, Iraq is not a subject that the Bush family discusses at family gatherings since they cannot seem to learn from their collective experiences. During the first Bush administration's Gulf War, our quickly advancing troops stopped short of Baghdad because "we were concerned about the long-term balance of power at the head of the Gulf ." These concerns were lost on his son as W pushed for a second war in Iraq to topple Saddam Hussein without bothering to plan for its aftermath. The result was an insurgency that "greatly increased the spread of the Al Qaeda ideological virus." In a second declaration of "mission accomplished," W signalled the approach of "a successful end" to the war by signing a Status of Forces Agreement that stated that "all the United States Forces shall withdraw from all Iraqi territory no later than December 31, 2011." He said this withdrawal was "possible because of the success of the surge" and left "the next President with a stable foundation for the future." Almost seven years later, Jeb, rhetorically asks why these troops left. Shouldn't he just ask his brother the next time they have dinner?

In many ways, Iraq was the Achilles heel that helped derail the Bush presidencies and Jeb seems to have their same vulnerability. His first misstep took place in May when he was asked "knowing what we know now, would you have authorized the invasion [of Iraq]?" In four days he gave four answers, including "I would've," "I don't know what that decision would've been ," "If we're going to get into hypotheticals, I think it does a disservice for a lot of people that sacrificed a lot," and, finally, "I would not have gone into Iraq." In the process of deciding if he should run for the presidency, did he really not think that his brother's defining failure would not be an issue? Just days earlier he had stated that W was the person he "listen[s] to for advice" on Israel policy. How is it possible that any discussions about Israel did not include the overall stability of the Middle East, including the lessons learned by the second invasion of Iraq?

The next misstep occurred as Jeb tried to lay blame for current problems in Iraq not on an invasion based on false premise, faulty planning or mistaken assumptions, but on a "premature" withdrawal from the country by the Obama administration. Although President Obama "essentially implemented the plan that he inherited" from W, Jeb blamed his brother's successor for this withdrawal, falsely stating that "we had an agreement that the president could have signed that would have kept 10,000 troops ." The Obama administration did negotiate to keep troops in Iraq beyond 2011, but the Iraqi parliament refused to approve immunity for American troops and "American officials wouldn't leave U.S. forces in place without it." Do you think that Jeb asked his brother if the Commander In Chief should have taken the risk of allowing American troops to be subject to prosecution under Iraqi law?


As the post-debate Suffolk Poll conducted in Iowa finds that "Jeb Bush has fallen to 7th place...polling a paltry five percent," the candidate has doubled down his alternate reality of the Iraqi withdrawal, claiming in a speech at the Ronald Reagan Presidential Library that Obama and Secretary Clinton have sacrificed the safety of Americans in "their blind haste to get out" of Iraq. Apparently, he still thinks that the President should have just disrespected "the sovereignty and the authority of Iraq's democracy" and simply ignored the Status of Forces Agreement. Even more amazing, Jeb bypassed Iraq in delivering a cautionary tale about why we need to make sure that Syria's Assad is "not replaced by something as bad or worse...where the end of a dictatorship [is] only the beginning of more terrorist violence" and instead cited Libya. Yes, "the death of four Americans in Benghazi" was tragic, but pales in comparison to the 3,424 combat deaths since W declared "Mission Accomplished" in Iraq. Perhaps Jeb should ask his brother how these deaths weigh on his conscience before continuing with his war mongering.

Related Topic(s): 2016 Presidential Primary Candidates, Add Tags
Add to My Group(s)
Go To Commenting
The views expressed herein are the sole responsibility of the author and do not necessarily reflect those of this website or its editors.