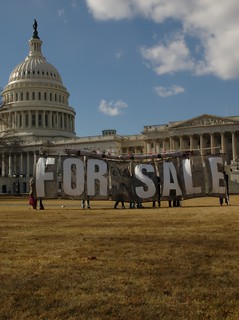 US Capitol For Sale
(Image by takomabibelot)   Details   DMCA
>

In a country with a Constitution beginning with the words, "We the People," should our economy work for all of us instead of just a few of us? You would think it should work for We the People, but example after example shows how it is actually rigged to work for only a few people.

Last week, in "Citizens Deliver 150K Petitions Demanding Postal Banking," made the point: "We can continue to have a rigged system that enables and encourages predators to take advantage of the public, or we can offer public options that protect and provide services for the public."

Here is a new video of the speakers at the Postal Banking petition delivery:

Nearly 28 percent of U.S. households (54 percent of African-American households) are forced to turn to payday lenders, check-cashers and other financial predators, because they can't get accounts at private banks. Postal banking -- having the post office offer simple savings accounts, bill paying, debit card and ATM services and small loans -- would provide low-cost financial services through the nation's 30,000 U.S. Post Offices.

Every other developed country has a postal banking option to serve their people. We do not. Because we do not, if Americans can't get a bank account they are forced to rely on predatory services. That rigs the financial services game against We the People.

If you need to see a doctor in England you just do, and you don't have to pay to do it. Almost every other developed country provides health care to serve their people. We do not. We are instead on our own -- forced to purchase private insurance with its high deductibles and co-pays.

We are banned by law from buying into Medicare until we are 65 -- and Republicans are trying to get rid of that by turning Medicare into a limited voucher to buy private scam insurance. That rigs the health care game against We the People.

How about our internet service? Did you know that municipalities -- or the Post Office --could offer us "public option" high-speed internet at a very low cost? (In many countries their Post Office offers internet and phone options to the people.) But by and large we don't get a public option. Instead we have to rely on telecommunications monopolies who deliver slow broadband speeds and make us pay whatever they say we have to pay. (And don't forget the fees!) This rigs the internet/telecommunications game against We the People.

We have been through decades of "privatization" -- turning public services over to private enterprise. They lay off the well-paid, unionized public employees and hire people at minimum wage. This cuts the tax base, hits local businesses, and forces foreclosures. On top of that, minimum-age employees require public services like food stamps just to get by.

The privatizers justify that by saying that private businesses always do everything better than government. But if We the People decide that we want to provide ourselves with a public option for a service, this is banned because it would be "unfair competition" with the private sector.

Related Topic(s): Medicare; Public Assets To Private Wealth; Public Ownership, Add Tags
Add to My Group(s)
Go To Commenting
The views expressed herein are the sole responsibility of the author and do not necessarily reflect those of this website or its editors.