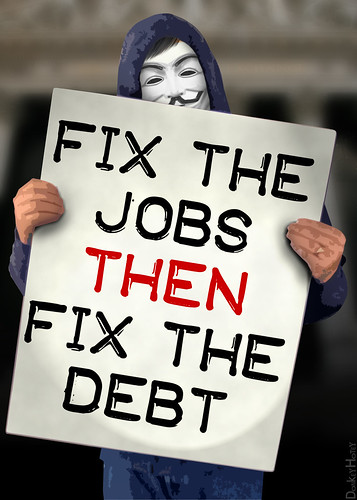 In the first column in this series I explained how Hillary Clinton, during the closing 40 days of her campaign, showcased repeatedly her promise to assault the working class with continuous austerity. I explained that her threat represented economic malpractice -- and was insane politics. I showed that the assault on the working class via austerity was such a core belief of the New Democrats that their candidate highlighted that assault even as the polls showed massive, intense rejection of her candidacy by the white working class. I also noted that in this second series in the column I would discuss the failure of her campaign team, and her de facto surrogate, Paul Krugman to speak truth to power about the dual idiocy of her campaign promise to wage continuous war on the working class through austerity forever.

The broader point is the one made so often and so well by Tom Frank -- it is morally wrong, economically illiterate, and politically suicidal for the New Democrats to continue to assault the working class via austerity, "free trade" (sic) deals, and financial deregulation. The only thing worse is to then insult the working class for reacting "badly" to being pummeled for decades by the Party that once defined itself as the party of working people. The New Democrats decided to insult the white working class in response to polls showing that the white working class was enraged at Hillary Clinton. Arrogance and self-blindness are boon companions.

I grew up in the Detroit-area and saw George Wallace win the Democratic Party primary for the presidential nomination, so none of this is new to me. We all know that the New Democrats are never going to listen to my warnings or Tom Frank's warnings. But the leaks show that Hillary had many competent staff who raised difficult questions. Why wasn't any senior campaign staffer willing to tell her that her austerity threats were economically illiterate and politically suicidal? Krugman warned President Obama several times that austerity was a terrible economic policy.

"At a time when so many families are tightening their belts, he's going to make sure that the government continues to tighten its own," Obama said. "

We'll never know how differently the politics would have played if Obama, instead of systematically echoing and giving credibility to all the arguments of the people who want to destroy him, had actually stood up for a different economic philosophy. But we do know how his actual strategy has worked, and it hasn't been a success

Why did he cease speaking truth to power as the election came down to the wire?

The New Democrats Were Locked Into Austerity

Ever since the birth of the New Democrats, their adherents have embraced austerity. This act of mutual economic and political self-destruction has become so core to their identity that Hillary unhesitatingly made it one her most important closing pitches during the last 40 days of her campaign against Trump. At the very moment when her pollsters were warning her that she could lose due to working class hostility, she chose to showcase her hostility to the working class by promising to inflict eight more years of austerity on them. In your face working class! This is a political strategy that has no upside, but a toxic downside. Despite intense criticism from progressives of her austerity threats, Paul Krugman never urged her publicly to promise to end austerity's assault on the working class. Similarly, no one on her official campaign team had the courage and strength to tell her to stop and reverse her position.

Part of Krugman's problem was that while he has come some distance from his long-held support for austerity, his reflexes are still wrong because he does not understand sovereign money. A November 14, 2016 Krugman column revealed the hold his past dogmas still had on him.

Related Topic(s): Austerity; Debt; Economic; Economics; Money; Money; Money; Paul Krugman; Power; Presidency; (more...) Truth To Power, Add Tags  (less...)
Add to My Group(s)
Go To Commenting
The views expressed herein are the sole responsibility of the author and do not necessarily reflect those of this website or its editors.

Krugman's Failure to Speak Truth to Power about Austerity

Krugman Triples Down on His Smear of Friedman and Bernie