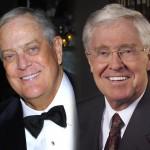 In an interesting juxtaposition from Monday's New York Times, a Times article explains a Times op-ed. The op-ed calls for killing the Export-Import Bank (Ex-Im), because it helps American companies compete globally. The news story reports that the anti-government Koch brothers network is behind the campaign.

From the article, "Koch-Backed Group Bolsters Effort to Shut Down Export-Import Bank":

"A trade association linked to the conservative billionaires Charles G. and David H. Koch will begin a new lobbying effort pressuring lawmakers to shut down the Export-Import Bank, a top target of conservative activists and outside groups that will cease to exist after June 30 if it is not reauthorized by Congress.

"The group, called Freedom Partners, will begin a six-figure digital advertising campaign and has set up a new website, eximexposed.org, to criticize the institution, which it has called a haven for cronyism and corporate welfare. But the real impact may not come from the size of the advertising campaign: The group's members include the Kochs and several hundred other big conservative donors, whose allegiance (and wallets) are avidly sought by Republican lawmakers and presidential candidates."

An op-ed in the same issue, "End This Corporate Welfare," by Chris Rufer, founder of The Morning Star Company, calls for closing the Export-Import bank because it is a U.S. government entity that helps American companies export goods to compete in the world, and that these companies will "pocket" profits they make.

"Ex-Im is a case study in corporate welfare. Founded during the New Deal, its mission is to 'support jobs in the United States by facilitating the export of U.S. goods and services.' In practice, it offers taxpayer-backed loans, guarantees and insurance to private companies."

Toward the end of the op-ed:

"Freedom Partners Chamber of Commerce -- a business league whose supporters include myself, Charles and David Koch and several hundred others -- opposes both the Export-Import Bank and the innumerable other examples of corporate welfare in Washington."

Getting an op-ed in the New York Times is a big deal. It's a funny juxtaposition that the Koch Brothers launch a big campaign, and a Koch partner in the campaign has an op-ed in the Times the same day.

What Is This About?

The Ex-Im bank provides loan guarantees to American companies that export goods, if other financing cannot be found. The bank does not provide benefits to "specific" or "certain" companies. It provides the same benefits to all American companies that export. It does not provide special favors, subsidies or tax breaks to corporations at the expense of the rest of us. It provides this financing assistance in order to help create and sustain U.S. jobs and lower the U.S. trade deficit. The bank not only does not cost taxpayers anything, it brings in revenue; according to the Congressional Budget Office, the Ex-Im bank is expected to return a profit of $14 billion over the next 10 years.

The Ex-Im bank is not "corporate welfare" -- even by the Koch brothers' own definition. The Koch-funded Cato Institute (formerly named the "Charles Koch Foundation") provides the following definition of "corporate welfare": "For the purposes of this study, 'corporate welfare' is defined as any federal spending program that provides payments or unique benefits and advantages to specific companies or industries." Another Cato definition says, "Corporate welfare refers to subsidies and regulatory protections that lawmakers confer on certain businesses and industries.

But the Ex-Im Bank provides the same benefits to any American company that exports, not "specific" or "certain" companies.

The Koch brothers and their supporters want the Ex-Im Bank killed because it is government. The Koch Brothers hate government, period. The Kochs and other "libertarians" believe that government is "collectivism" that "interferes" with business. They do not believe that government should do anything at all, other than provide a military and protect private -- their -- property. They do not even believe our own government should help our own country's companies. They believe there is no "national" interest, only the interests of individual businesses -- and ultra-billionaires like themselves.

Related Topic(s): Banking; Export-import Bank; Koch Brothers, Add Tags
Add to My Group(s)
Go To Commenting
The views expressed herein are the sole responsibility of the author and do not necessarily reflect those of this website or its editors.