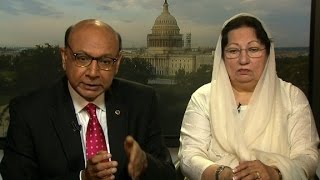 Against the wishes of her New York Democratic constituents, Hillary Clinton voted with Senate Republicans to invade Iraq. (It was a pivotal vote. Without Democratic support, George W. Bush's request for this war of aggression would have failed.)

Humayun Khan, 27, was an army captain who got killed during that invasion.

Eight years later, the dead soldier's parents appeared at the 2016 Democratic National Convention -- not to protest, but in order to endorse one of the politicians responsible for his death: Hillary Clinton.

Even more strangely, Clinton's opponent Donald Trump is the one who is in political trouble -- not because Trump sent Khan to war, but because Trump committed a relatively minor slight, especially compared to the numerous outrageous utterances to his name. Trump didn't denigrate the dead Humayun Khan. Nor did he directly insult his parents. Lamely trying to score a feminist point concerning radical Islam, Trump insinuated that Mr. Khan didn't allow Mrs. Khan to address the crowd because as a Muslim, he doesn't respect women.

Let us stipulate that no one should impugn the courage of the war dead. (Not that anyone did here.) Let us further concede that Donald Trump is a remarkably tactless individual. Those things said, the Khan controversy is yet another spectacular example of the media distracting us with a relatively minor point in order to make a much bigger issue go away.

A week ago corporate media gatekeepers managed to transform the Democratic National Committee internal emails released by WikiLeaks from what it really was -- scandalous proof that Bernie Sanders and his supporters were right when they said the Democratic leadership was biased and had rigged the primaries against them, and that the system is corrupt -- into a trivial side issue over who might be responsible for hiking the DNC computers. Who cares if it was Russia? It's the content that matters, not that it was ever seriously discussed.

Hillary's vote for an illegal war of choice that was sold with lies, was a major contributing factor to the death of Captain Khan, thousands of his comrades, and over a million Iraqis. Iraq should be a major issue in this campaign -- against her.

Instead, it's being used by his parents and the Democratic Party to bait Donald Trump into a retro-post-9/11 "Support Our Troops" militaristic trap. Khan, you see, was "defending his country." (How anyone can say U.S. soldiers in Iraq, part of an invasion force thousands of miles away where no one threatens the United States, are "defending" the U.S. remains a long-running linguistic mystery.)

"Hillary Clinton was right when she called my son 'the best of America,'" Khizr Khan told the convention. Unfortunately, the moniker can't apply to once-and-possible-future-first-daughter Chelsea Clinton, who never considered a military career before collecting $600,000 a year from NBC News for essentially a no-show job. But anyway...

"If it was up to Donald Trump, he never would have been in America," Khizr Khan continued. The cognitive dissonance makes my head spin. Obviously, Trump's proposal to ban Muslims is racist and disgusting. Ironically, however, it would have saved at least one life. If it was up to Donald Trump, the Khans would still be in the United Arab Emirates. Humayan would still be alive. As would any Iraqis he killed.

"Let me ask you: Have you even read the U.S. Constitution?" asked Khizr, who is originally from Pakistan. "I will gladly lend you my copy. In this document, look for the words 'liberty' and 'equal protection of law.'" A good question. While we're at it, however, where does it say in the U.S. Constitution that the president can send troops overseas for years at a time without a formal congressional declaration of war? Where does it say that the United States can attack foreign countries that have done it no harm and have never threatened it?

As you'd expect Trump, he of little impulse control, has handled this about as poorly as possible. Asked about Khizr Khan's remark that Trump hasn't made any sacrifices, he idiotically attempted to compare his business dealings with the death of a son. Still, you have to grudgingly admire Trump for fighting back against a guy you are officially not allowed to say anything mean about.

It has been widely remarked, always approvingly, that this year's Democrats have successfully appropriated images of patriotism and "optimism" -- scare quotes because this is not the kind of actual optimism in which you think things are going to actually get better, but the bizarro variety in which you accept that things will really never get better so you'd might as well accept the status quo -- from the Republicans. This is part of Hillary Clinton's strategy of taking liberal Democrats for granted while trying to seduce Republicans away from Trump.

Related Topic(s): Democratic; Media; Muslim; Wikileaks, Add Tags
Add to My Group(s)
Go To Commenting
The views expressed herein are the sole responsibility of the author and do not necessarily reflect those of this website or its editors.