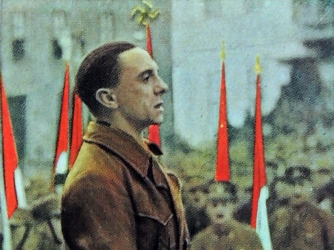 Copyrighted Image? DMCA
The past three weeks have been depressing, surreal, maddening. I am back in High School debating the Vietnam War and abortion and freedom of the press and "1984" and Civil Rights and on and on. This country has slipped on the banana peel from hell. The past is the future and the future is the past. A country very aware of the horrendous, destructive fascist horrors of just over seventy years ago that elects a man like Donald Trump as President is either doomed or cynically auditioning for Gretchen Carlson's former job at Fox News. Monkeys playing with each others butts and wildly masturbating in a rusting Victorian cage in a curio shop in Matamoros, Mexico come to mind.

Being cute or funny doesn't really cut it anymore. We're trapped in an attic, naked, with a bunch of rabid squirrels. Stop.

I have been thinking a lot lately about what I would have done as an aware German when Adolf Hitler came to power. Would I have had the courage to speak out, to protest, to write? Would I have recognized Reich Minister of Propaganda, Joseph Goebbels, as the potentially dangerous individual he was in 1933? Would I have wheat pasted treatises against the looming threat on the brick walls of alleys and side streets? I hope that I would have. And, I am now -- Kellyanne Conway is the Joseph Goebbels of this new pathetic, destructive regime. She has obviously embraced manipulative propaganda. Is she worse than Goebbels? He truly believed the filth that circulated in his rotten mind -- Kellyanne does it for money?

On this past weekends edition of Meet The Press Kellyanne sparred with Chuck Todd over the President Elect's potential conflicts of interest, Mitt Romney and The Media. Then, sitting in her puddle of very skillful bullshit she chose to wax Goebbelesque -- to tell a lie, to tell a lie as the representative of the elected leader of the country. She said that 72% of the country supported Donald Trump. Well, she didn't say it quite like that, she implied that 72% of the country was on the same page as Trump. The truth is that Trump won the election with only 25.5 to 27% of eligible voters. Only ten percent of Germans in Nazi Germany were card carrying Nazis.

Kellyanne Conway has chosen to use obfuscation and lies and in her position and as it was with Goebbels, this is dangerous. "If you tell a lie big enough and keep repeating it, people will eventually come to believe it. The lie can be maintained only for such time as the State can shield the people from the political, economic and/or military consequences of the lie. It thus becomes vitally important for the State to use all of its powers to repress dissent, for the truth is the mortal enemy of the lie, and thus by extension, the truth is the greatest enemy of the State," Joseph Goebbels said this as he proudly vomited propaganda on his nation, validating and enabling his Fuhrer's destruction of Europe and the Jews.

Now is not the time to ball up in depression or fall back on trendy cynicism, now is the time to root out the rank perpetrators of civic rape, no matter their stripes. For me and mine I will continue to hollar and howl. Kellyanne Conway is a propagandist, not simply on policy -- she is the chief apologist and hagiographer of a personality and a cult, as was Goebbels. The Trump phenomenon is a cult -- there is nothing and no one of value behind the official curtain.

Related Topic(s): Donald Trump; Fascist; Hitler; Kellyanne Conway; Propaganda; Squirrels, Add Tags
Add to My Group(s)
Go To Commenting
The views expressed herein are the sole responsibility of the author and do not necessarily reflect those of this website or its editors.