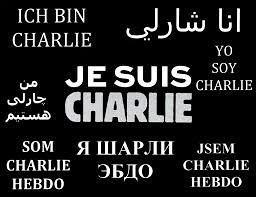 The terrorist attacks on French satirical magazine Charlie Hebdo and a Jewish supermarket killing 17, including some of France's most prominent cartoonists, saw over 3 million demonstrators take to the streets of France bearing banners spelling out "Je suis Charlie" and "nous sommes tous Charlie" in the country's strongest stance of solidarity against terrorism France has ever seen. Alongside the 1.6 million demonstrators in Paris, President Francois Hollande was joined by over 40 world leaders to commemorate the tragic events in the days before, dubbed by some as "France's 9/11".

Amid justified outrage and disbelief, the international community appears to have turned their heads to reports that just a few days before the Charlie Hebdo attack, Nigeria's insurgent group Boko Haram killed as many as 2,000 people in Baga, located in the northeastern state of Borno, in what Amnesty International has denounced as the group's "deadliest massacre" yet. Days later, a girl as young as 10 years old was strapped with a bomb and detonated in a crowded market in Maiduguri, killing 19 and injuring many others. Boko Haram, which has been gaining ground in the country since 2009, has embarked on a grand-scale terror campaign in the northeast of Nigeria, attacking police, towns, government buildings, churches and civilians. Last year, the group rose to prominence with the abduction of over 200 schoolgirls that was widely condemned in Western media. Today, the group controls a chunk of land the same size as the one under the grip of the Islamic State in Iraq and Syria in a crisis that has seen the death toll mount to 10,501 since May 2011. These disturbing facts beg the question, why have international leaders and the general public come out in solidarity in Paris, while the media has almost completely ignored the attacks in Nigeria?

Simon Allison, writing on Daily Maverick, a partner on the Guardian Africa Network, rightly expressed his own sentiments on the events, chiming "I am Charlie, but I am Baga too" while also explaining that the lack of coverage of Nigeria's most recent terrorist attacks indicates that while "it may be the 21st century, [...] African lives are still deemed less newsworthy -- and, by implication, less valuable -- than western lives." Such a dangerous attitude to the lives of non-westerners in African and Arab states ignores the fact that jihadism is a global issue that requires a global solution.

Nigeria's Catholic Archbishop, Ignatius Kaigama, has already raised his concerns over the Western silence over the massacre in Baga underlining the differences between attacks in France and Nigeria, arguing that Nigeria cannot fight the militant Islam group alone. On the eve of the Nigerian presidential elections due to take place on February 14, Western leaders and allies need to think long and hard how they can support a country that is increasingly becoming the playground for extreme Islamism wrecking havoc on a defenseless population.

The Nigerian presidential race will take place between incumbent President Goodluck Jonathan of the People's Democratic Party and former military dictator Muhammadu Buhari, candidate from opposition party All Progressive Congress, in what is said to be the tightest competition since Nigeria's established democracy in 1999, following a decades-long period of military rule. Since Jonathan's tenure was marked by the intensification of violence in the country's north, many Nigerians now perceive general Buhari as the right man for the top job. But his former record as head of state leaves much to be desired for a country that is trying to flesh out a strong democratic system in the midst of extremism.

Coming to power after overthrowing a democratically elected government in 1983, Buhari embarked on a brutal campaign against "indiscipline" and corruption, one that was mired with multiple human-rights abuses. During his short-lived tenure (until 1985), he jailed approximately 500 politicians, officials and businessmen for wasteful spending and corruption and imposed a famous decree restricting press freedoms, leading to some overarching questions about his long-term commitment to democracy. Following a failed economic policy and rebalancing of finances that led to mass job losses, price hikes and falling living standards, Buhari was ousted in a coup.

As Boko Haram continues its brutal attacks, the elections will also likely be plagued by violence in the northeast, with Buhari even having called for a bloodbath should he deem this year's elections not free and transparent. His remarks came in 2012 following his loss in the 2011 presidential race against Jonathan, during which he claimed elections were rigged in despite of EU, African Union, and independent electoral monitors announcements that the elections were free and fair "and the best election since Nigeria returned to civil rule". Similarly, Thomas Hansen of Control Risks insists that 2011 saw a decrease in election manipulation and believes "that trajectory is going to continue" in despite of potential attempts by Boko Haram to attack the voting process.

Originally from Tunisia, Joseph Benzekri now lives in France and spends much time between Europe and the MENA region. He is the founder and CEO of Benzerki Impot&Export, has worked in the agro-export sector for over two decades, and is an active (more...)
Related Topic(s): Boko Haram; Charlie Hebdo; Goodluck Jonathan; Muhammadu Buhari; Nigeria, Add Tags
Add to My Group(s)
Go To Commenting
The views expressed herein are the sole responsibility of the author and do not necessarily reflect those of this website or its editors.

America's man in Libya isn't the right one for the country