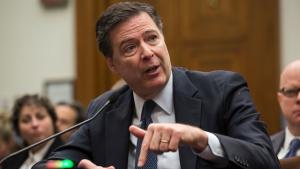 Among the House of Cards-infested cliffhangers that defined the circus is in town US election (to quote Nobel Prize winner Bob Dylan's Desolation Row), the key question in the lead-up towards Election Day was why the FBI finally folded.

FBI Director James Comey, at the 11th hour, ended up delivering another letter to Congress, marveling how his team has been working around the clock studying no less than 650,000 emails on the laptop belonging to Anthony Weiner, the sex pervert estranged husband of Hillary Clinton's top aid Huma Abedin.

Comey finally concluded the FBI had not found anything to change its previous verdict regarding Hillary's Subterranean Email Server. Extreme carelessness, yes; but no criminal wrongdoing.

All this while among the twitter.com/wikileaks.

Podesta emails published by WikiLeaks, an explicit admission can be found in a November 10, 2008 internal review that the Clinton Foundation was breaking the law.

Moreover, The Big Picture had been quite clear all along; the Clinton Foundation as well as the Clinton Global Initiative were both operated as political organizations totally focused on boosting pay to play.

A case could be made that the first Comey letter to Congress was a response to an FBI internal revolt. Agents that were part of the insurgency are not likely to quit the long game -- even after the election. They have made sure that the real deal is with the Clinton Foundation, not Hillary's emails.

So leaks are bound to continue. Even before the first Comey letter, FBI insurgents swore there already is enough to indict. They insisted, Comey has been trying to stall because he does not want to face the Clinton machine, as well as the rest of Washington D.C. They were sure foreign powers are in possession of some of the documents we have analyzed, because they were hacked from the Clinton server.

The insurgents, for the sake of clarity, were insisting that the buck stopped with the Clinton Foundation, which sold influence, intel, favors to anyone willing to pay. Obama was tied in with the same people who donate to the Clinton Foundation. On that notorious, secret Bill Clinton meeting with Attorney General Loretta Lynch -- an Obama asset -- they maintained that Clinton wanted Loretta Lynch to focus on the email server and shy away from prosecuting the foundation.

In a nutshell; in the Clinton Foundation dossier there's allegedly enough information to bring the whole US government (USG) down.

And over Hillary, specifically, hangs an incendiary charge; SAPs (Special Access Programs) were found on her server.

The insurgents clarified how a SAP is an intelligence program classified above top-secret. They are held on closed servers at secret locations. The only way to get one is if you are specifically read on to a program, have a need to know, then you must physically go to a location and pass through several layers of security to even look at the program. SAP is granted on a need to know basis, and Hillary did not have any need to know any of the programs on her server .

All that was still not enough to get an indictment out of the FBI. Well, certainly not before Election Day, considering that if the FBI went ahead it would be facing no less than the full might/wrath of the USG.

A New York source with solid business/financial connections among the Masters of the Universe came up with a quite cryptic answer when I posed him some of the questions raised above:

Related Topic(s): Al Qaeda; Clinton Foundation; Fbi Director James Comey; Wikileaks, Add Tags
Add to My Group(s)
Go To Commenting
The views expressed herein are the sole responsibility of the author and do not necessarily reflect those of this website or its editors.