There have always been two narratives about this election. One predicted what actually happened in the end, while the other missed the boat completely.

Narrative 1. Bernie Sanders represents the unachievable in American politics. Hillary Clinton is the candidate of experience and realism. Donald Trump is a temporary phenomenon, feeding on passions and resentments, not meant to last the duration. Trump's supporters are more economically privileged than Clinton and Sanders voters, and are motivated by pure racism and misogyny. The election is about the cultural values of tolerance, openness and identity, therefore we must support Hillary. Anyone who doesn't support Hillary must be suspected of harboring racist and misogynist feelings themselves.

Narrative 2. Bernie Sanders is offering necessary correctives, at the most minimal level, to the excesses of the neoliberal economy of the past 40 years. Hillary Clinton represents the essence of said neoliberalism, embodying its worst practices, from trade to immigration. Donald Trump has tapped into real economic anxiety among those--half of the country at least--who have lost under neoliberal globalization. This election is about returning equal economic rights to all citizens. Only Bernie Sanders has the winning message for this explosive situation.

Everyone who propagated Narrative 1--which is nearly 100 percent of the liberal media, the intellectual community as a whole and elite professionals--got it wrong every step of the way. The utter failure of predictive power means that the model was flawed. 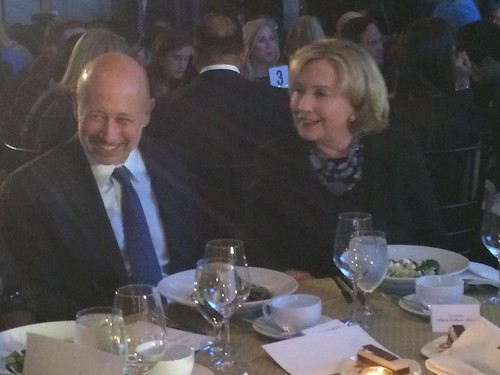 Those who believed in Narrative 2--which included a vanishingly small proportion of intellectuals--got it right at every turn. Trump won, Hillary lost, and we are in for a very bad time, just as our model predicted. Zizek had it right, Michael Moore had it right, and I had been saying all along that this outcome was inevitable. I wrote back in May that Trump would win by pinning neoliberal failures squarely on Hillary's shoulders.

Essentially, those who chose Hillary over Bernie during the primaries, when we had a clear choice, voted for Trump, since Bernie was always the stronger candidate against Trump or any Republican general election candidate. The polls consistently proved it.

The liberal elite, all during this campaign, showed its intolerant colors, mocking anyone who raised questions about Hillary's background and competence as inherently misogynist, sidelining questions of political economy in favor of preferred identity politics tropes, banning dissenters and skeptics of Narrative 1 from their websites and forums, questioning their very humanity. Even now--in the wake of the Trump win--they are refusing to accept their culpability in making the wrong choice by throwing up their hands and exclaiming: "I can't understand how this could have happened!"

On a Pacifica radio show on October 27, where I discussed the reasons why Trumpism had come into being and why I expected it to last well beyond the election regardless of the outcome, half the callers repeated the neoliberal Narrative 1, saying in essence that Trump supporters were facing undesirable economic fates because of their own lack of responsibility toward their personal lives. Why don't they get educated, why don't they get jobs, why don't they move to where the jobs are? And why wasn't I talking about the Access Hollywood tape--apparently the paramount issue in this campaign? Why didn't I talk about Trump's misogyny, which was instantly disqualifying and branded his supporters too as falling in the same vein? This was from Pacifica listeners, presumably the most liberal audience in America!

But there was also the other half, believers of Narrative 2, who thought that the Democratic Party had been suicidal by not choosing Bernie, and who understood the economic grievances of the "leftovers" who supported Trump on the Republican side and Bernie on the Democratic side. They were not falling for the moral righteousness of the liberal media.

What can we say now about the fate of the entities involved in this crash of an election, when the contradictions have so manifestly come to the fore?

1. Is neoliberalism dead? Hardly. This is the ideology that survived 9/11, the presidency of George Bush Jr. and the Great Recession, with barely a scratch. But it has received its most serious blow yet (the first, less severe one, was Brexit), as its entire range of practices, from neoliberal trade benefiting large corporations to a kind of exploitative identity politics that favors internalization of neoliberal psychology, has come under attack from Trumpism. We shall see how neoliberalism responds and regroups, how it works through the Democratic Party to find a different channel of expression than the Clintonian one.

2. Is the Democratic Party dead? Given a clear progressive choice in the primaries, the Democratic Party establishment went for the failed neoliberal candidate of war, inequality and injustice. At the moment, the entire party stands discredited. It is not easy to write off a behemoth as powerful as this, but it is more vulnerable than it has been since the 1960s. The philosophy of catering to upwardly mobile professionals, exploiting immigrants in the neoliberal setup while simultaneously expounding their virtues, and constructing a façade of moral righteousness while ignoring the existence of poor people of any color, stands discredited. After their catastrophic loss in 2008, the Republicans went through one more cycle of doubling down, with Mitt Romney in 2012, before a populist revolution swept the establishment away. How long will it take the Democratic Party as we knew it to end?

3. Is the Republican Party dead? Clearly, it is not what it was before Trumpism, it is no longer the party of Reagan and other supply-siders. On paper at least, Trumpism is virulently opposed to the principles of neoliberalism, around which Republicans, with minor differences on taxation and welfare and other policies, cohere with Democrats as a governing philosophy. To what extent will Trump put his anti-trade, anti-immigration and anti-interventionist policies into practice? Even if he draws back on his stated goals, the genie is out of the bottle. The Republican Party, exploiting cultural fears (exactly as the Democrats have done on the other side) while executing economic policies that benefit the rich, can no longer exist in its old form.

4. Is the liberal media dead? One of the positives of this campaign is that despite relentless 24/7 propaganda about Trump, exaggerating his personal foibles while painting anyone not supportive of Hillary as a closet misogynist, racist or even sexual predator, the message failed to get through. In the end, no one paid any attention. Those inside the elite bubble were persuaded that they were headed for victory, hearing nothing contrary in their own ecosphere, when they were in fact doomed. The people have shown that they can tune out this noise. The media has fragmented so much that only those who are already persuaded come within the ambit of any new message, so in essence they have pounded their way into their own irrelevance.

Related Topic(s): Democratic Cowards; Democratic Party; Party Machine Democratic; Presidential Campaign Democratic, Add Tags
Add to My Group(s)
Go To Commenting
The views expressed herein are the sole responsibility of the author and do not necessarily reflect those of this website or its editors.