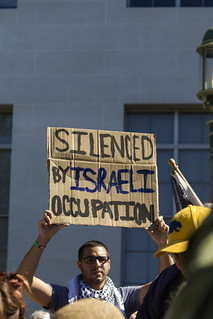 The Netanyahu government has conveniently and consistently separated the occupation of the West Bank from the repeated eruption of violence, insisting that the Palestinians' unrest is a result of incitement by Palestinian Authority President Mahmoud Abbas, when in fact he has been attempting to reduce the tension. Not once has any Israeli official suggested that nearly 50 years of occupation might have brought the Palestinians to a boiling point. Any incident could have ignited a new violent flare-up, and the conflict over the Temple Mount/Haram el-Sharif provided the spark that led to the current fire, regardless of whose side was at fault.

The most troubling issue is that successive Israeli governments remained blind and refused to connect much of the Palestinian violence to the occupation; what is worst is that the Israeli public has largely bought into the fallacy of this argument.

They are persuaded by the pervasive and misleading official narrative that even if Israel were to evacuate the West Bank, the Palestinians will not end their violent resistance to Israel's very existence.

They insist that the Palestinians are determined to take over all of Mandatory Palestine rather than establishing a Palestinian state limited to the West Bank and Gaza, to live side-by-side Israel in peace.

Ironically, whereas this charge against the Palestinians is deeply ingrained among right-wing Israelis, they cheer the fact that many members of the Israeli government categorically reject the establishment of a Palestinian state on any part of the Jews' "biblical homeland."

To make the case against the withdrawal from the West Bank, Israeli officials point to Israel's evacuation of Gaza in 2005, its subsequent takeover by Hamas, and the violence emanating from it.

Netanyahu and his ultra-conservative cohorts argue that Israel must learn from this experience and thus should not withdraw from the West Bank, which is far closer than Gaza to Israel's urban centers.

They further argue that should Israel evacuate the West Bank, Hamas will certainly take over and turn it into another staging ground from which to launch rocket attacks, cut Israel in half, and inflict incalculable losses in lives and property.

Ironically, this suggests that Palestinian radicalism can be contained under occupation when in fact the occupation itself is the prime cause behind the intensified Palestinian extremism.

Brigadier General Guy Goldstein, Deputy Director of Government Activities in the Territories no less, stated only yesterday: "It's a rebellion of "terror that comes from pain and frustration." But then leave it to the hypocrites in Netanyahu's government to justify continuing the occupation, presumably to stem the rise of violent extremism.

Indeed, if Israel were to precipitately and unilaterally withdraw from the West Bank, as it did from Gaza, a similar result could theoretically reoccur. As such, the withdrawal from Gaza offers a different kind of lesson from which Israel must learn.

Unlike the conditions that existed in Gaza, the PA has begun in earnest to build the foundations of a state with schools, clinics, a network of roads, and private and government institutions. They were even praised by Israel's top security officials for their full cooperation with Israel on all security matters, even in times of increased tension between the two sides, as is currently the case.

What is most worrisome, however, is that neither Netanyahu nor any of his coalition partners know where Israel will be if the occupation continues for another five to 10 years, how many more Palestinian uprisings will occur, and what will be the death toll and destruction both sides sustain?

I believe that the Israelis who have been traumatized by the violent events of the past few weeks should ask themselves a simple question:

If a handful of Palestinians have managed to cause such havoc with the entire Israeli security apparatus in place and thousands of Israeli troops stationed throughout the West Bank, by what logic can any honest person say that the occupation bolsters Israel's national security?

Related Topic(s): Benjamin Netanyahu; Israel; Occupation; Palestinian; Violence, Add Tags
Add to My Group(s)
Go To Commenting
The views expressed herein are the sole responsibility of the author and do not necessarily reflect those of this website or its editors.