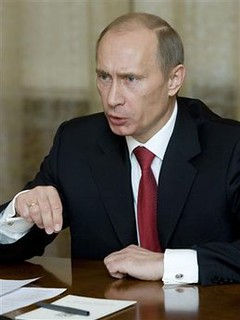 "If undercharging for energy products occurs deliberately, it also effects those who introduce these limitations. Problems will arise and grow, worsening the situation not only for Russia but also for our partners." -- Russian President Vladimir Putin

It's hard to know which country is going to suffer the most from falling oil prices. Up to now, of course, Russia, Iran and Venezuela have taken the biggest hit, but that will probably change as time goes on. What the Obama administration should be worried about is the second-order effects that will eventually show up in terms of higher unemployment, market volatility, and wobbly bank balance sheets. That's where the real damage is going to crop up because that's where red ink and bad loans can metastasize into a full-blown financial crisis. Check out this blurb from Nick Cunningham at Oilprice.com and you'll see what I mean:

"According to an assessment from the Federal Reserve Bank of Dallas, an estimated 250,000 jobs across eight U.S. states could be lost in 2015 if oil prices don't rise. More than 50 percent of those job losses would occur in Texas, which leads the nation in oil production.

"'There are some early signs that a slowdown in drilling could spread to the manufacturing sector in Texas,' one executive at a metal manufacturing company said in the survey, 'the drop in crude oil prices is going to make things ugly... quickly.' Another company that manufactures machinery told the Dallas Fed, 'Low oil prices will drive reductions in U.S. drilling rigs, which will in turn reduce the market for our products.'

"The sentiment was similar for a chemical manufacturer, who said 'lower oil prices will adversely impact margins. Energy volatility will cause our customers to keep inventories tight.'

"States like Texas, North Dakota, Oklahoma, and Louisiana have seen their economies boom over the last few years as oil production surged. But the sector is now deflating, leaving gashes in employment rolls and state budgets." (Low Prices Lead To Layoffs In The Oil Patch, Nick Cunningham, Oilprice.com)

Of course industries lay-off workers all the time and it doesn't always lead to a financial crisis. But unemployment is just one part of the picture, lower personal consumption is another. Take a look:

"Falling oil prices are a bigger drag on economic growth than the incremental 'savings' received by the consumer...Another way to show this graphically is to look at the annual changes in Personal Consumption Expenditures (PCE) in aggregate as compared to the subsection of PCE spent on energy and related products. This is shown in the chart below.

See? So despite what you might have read in the MSM, lower gas prices do not translate into greater personal consumption or more robust growth. Quiet the contrary, they tend to intensify deflationary pressures and reduce activity which is a damper on growth.

Then there's the knock-on effects that crashing prices and layoffs have on other industries like mining, manufacturing and chemical production. Here's more from Oil Price:

"Oil and gas production makeup a hefty chunk of the 'mining and manufacturing' component of the employment rolls. Since 2000, when the oil price boom gained traction, Texas has comprised more than 40% of all jobs in the country according to first quarter data from the Dallas Federal Reserve...

"The majority of the jobs 'created' since the financial crisis have been lower wage paying jobs in retail, healthcare and other service sectors of the economy. Conversely, the jobs created within the energy space are some of the highest wage-paying opportunities available in engineering, technology, accounting, legal, etc. In fact, each job created in energy related areas has had a 'ripple effect' of creating 2.8 jobs elsewhere in the economy from piping to coatings, trucking and transportation, restaurants and retail...

"The obvious ramification of the plunge in oil prices is that eventually the loss of revenue will lead to cuts in production, declines in capital expenditure plans (which comprise almost 1/4th of all capex expenditures in the S&P 500), freezes and/or reductions in employment, and declines in revenue and profitability...

Related Topic(s): Obama; Oil; Oil Pipelines; Price Gouging; Vladimir Putin; World Issues, Add Tags
Add to My Group(s)
Go To Commenting
The views expressed herein are the sole responsibility of the author and do not necessarily reflect those of this website or its editors.