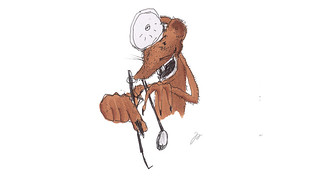 who loves a dentist ?
(Image by julia pichler)   Details   DMCA

For an example of how Big Money in politics is causing real harm to average Americans, look at the practice of dentistry in this country.

The United States is facing a dental care crisis for a number of reasons. First, dental care has become so expensive many of us can't afford to go the dentist. More than 130 million of us lack dental benefits--far more than the number of people without medical coverage. And even people who have dental benefits usually find they're on the hook for 50 percent of the cost of expensive procedures like root canals and crowns.

Other reasons for the crisis include the fact that Medicare doesn't cover dental work. And the fact that only 20 percent of dentists are willing to treat Medicaid patients. In addition, few dentists practice in rural areas or poor neighborhoods of big cities. One of every six Americans lives in a "dental desert," which is a community where few if any dentists practice.

Despite all of this, access to affordable dental care can be improved, and in ways that wouldn't cost taxpayers a dime. Community-led efforts to improve oral health in this country--including the use of mid-level dental providers to deliver care in underserved areas--have attracted strong support from both ends of the political spectrum. All too often, though, those efforts have been stymied by organized dentistry.

Among the champions of mid-levels in dentistry is none other than Grover Norquist, the founder of Americans for Tax Reform, which advocates for limited government and lower taxes.

When I asked Norquist recently why he has gotten involved in the fight to expand the dental workforce to include mid-levels--often called dental therapists--he told me it's because, in his view, opponents are engaging in tactics to preserve a profitable status quo at the expense of millions of Americans. To him, this smacks of "crony capitalism" in which businesses and professionals exert influence on government officials, usually through campaign contributions and lobbyists, to get favorable treatment.

Norquist's organization has joined a coalition of what some might view as strange bedfellows--conservatives, liberals, patient advocates, community-based organizations and even Native American tribal leaders--in urging state officials to support what organized dentistry continues to oppose: allowing dental therapists, whose scope of practice would range from education and prevention to uncomplicated extractions and fillings, to treat patients where dentists are in short supply.

Norquist has written letters to officials in a number of states encouraging them to "tear down an unnecessary government barrier" that prevents mid-levels from providing dental services "at no cost to taxpayers."

In one of his letters, to Texas officials, Norquist wrote that:

Dentists who want to expand their practices to include educated and qualified mid-level practitioners should be free to do so. Innovative ideas like this have faced intense opposition but are very similar to the fights that took place decades ago with the emergence of nurse practitioners. Physicians began working and collaborating with nurses who had clinical experience to fill a void left by specialization in the medical field. Today, nurse practitioners provide equivalent or superior care to that provided by physicians.

He said mid-levels could fill a similar void in dentistry.

"It is undeniable that there is a dentist shortage, particularly in underserved and rural areas," he wrote, adding that Americans for Tax Reform supports measures that would "alleviate this issue by permitting, but not requiring, small businesses" operated by dentists to hire mid-levels.

In a recent blog post, Paul Blair, state government affairs manager for Americans for Tax Reform, wrote that, "dental therapists may hold the key for providing dental services in underserved and rural populations." He noted that like hygienists, dental therapists work under the supervision of dentists "with collaborative agreements that allow them to provide an expanded list of services to patients."

"Americans for Tax Reform supports this bold type of dental care reform," he wrote, "because it, at no cost to taxpayers, stands to expand health care to underserved populations in the United States."

Related Topic(s): Cronyism; Dentist Dentistry; Health, Add Tags
Add to My Group(s)
Go To Commenting
The views expressed herein are the sole responsibility of the author and do not necessarily reflect those of this website or its editors.