His style is to play devil's advocate to the hilt, but tonight it was hard to tell the difference between an imitation of enthusiasm by MSNBC's star of Hardball and the real thing. It's hard to believe that Chris Matthews is merely describing the way 45% of Republican voters feel about Donald'Trump's plan to halt illegal immigration - or his solution to the lightening spread of ISIS (bomb the oilfields they get their money from) that has 34% of Republicans ready to vote for him.[tag] 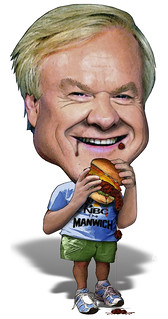 Eyes sparkling, Matthews could hardly curb his ardor, as the sole woman on his panel of three, Joan Walsh, of Salon.com, tried to speak sanity. It may not have been his intention to promote Trump, but if that is the case, he chose the wrong way to go about it. After showing a clip of the Donald bragging about his wealth, it did not even occur to him to wonder how many workers Trump had made prosperous.

Related Topic(s): Chris Matthews; Immigration; Losing Elections; Money, Add Tags
Add to My Group(s)
Go To Commenting
The views expressed herein are the sole responsibility of the author and do not necessarily reflect those of this website or its editors.