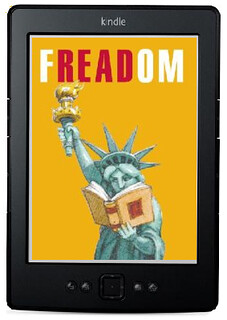 The Frankfurt Book Fair is the world's largest trade convention for publishers and vendors.

This year, the six-day convention, which ends Sunday, brought more than 7,400 exhibitors from 100 countries. Attendance was more than 300,000.

But, hundreds of Iranian publishers, editors, and printers didn't attend.

That's because Iran boycott the convention.

Salmon Rushdie, author of The Satanic Verses, was the keynote speaker.

In 1989, a year after its publication, the Ayatollah Khomeini, Iran's religious and political leader, banned the book and issued a fatwa calling for Rushdie's death because the Ayatollah and millions of Muslims believe no one should insult Muslims, the religion Islam, or write against the prophet Mohammed. Although a new government a decade later cancelled the death threat, the fatwa still exists.

Militant Muslims aren't the only ones who believe in suppressing literature and thought.

Nazi Germany banned books by Jews, and created fires where the people could throw their books. At the same time the Nazis were burning books, Hollywood was bowing to the self-imposed "film standards" of the Hays Commission, which was vigorously keeping American film "pure" of evil thoughts and sexual depictions.

A decade after World War II ended, and with Hollywood censorship still restricting script content, Americans threw rock and roll records, which they called the Devil's Tool, into bonfires.

Two weeks before the Frankfurt Book Fair was Banned Book Week in the United States. The annual information campaign is sponsored by the American Library Association to highlight the problem with censorship. Most of the reasons why school boards and others want to ban books is because they challenge authority or present social and political issues that certain people don't want to hear--and don't want others to hear.