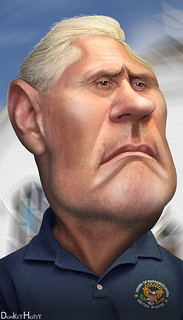 So the Indiana Legislature passed and the Governor signed a law that, claims to the contrary notwithstanding, as Frank Rich and many others have noted, surely seemed intended to permit persons operating public accommodations and publicly licensed and/or permitted businesses to discriminate against LGBTQ persons, based on their sexual orientation.

Certainly the list of organizations which sponsored the legislation in Indiana (and have done so in many other states) have not been shy about saying that that's what it is all about. Those organizations include the American Family (sic) Association (state and national), "Advance America," the Southern Baptist Convention's Ethics & Religious Liberty Commission, the Heritage Institute, and the Family (sic) Research Council. Of course, one wonders just how Indiana businesses which want to discriminate against LGBTQ persons would pick out the discriminatees. Since most LGBTQ persons look just like everyone else, would there be a law in Indiana requiring the known among them to line up to receive, let us say, a Pink Triangle? Now it is true that was the insignia the Nazis used to identify homosexuals, starting just after they took power in 1933, two years before they came up with the Yellow Star of David to identify the Jews. So there might a problem in that. Perhaps someone in one of the organizations listed above could give it some thought and come up with a better one. One does have to admit that the wording of the law is a bit dense and can be confusing. So despite the fact that it was: the Republican Right in the Indiana State legislature that made sure that the law went through with language specifically "protecting" potential discriminators who claimed a "religious exemption" from any government action against them; that the above list of known homophobic organizations had lined up behind passage of the law; and that several of their leaders had physically lined up behind Indiana's Governor Pence when he signed it; with a straight face the Governor said over-and-over again (at least until the economic pressure began to build) that the law did nothing of the sort, and did not need to be "fixed." The national reaction to the law was very gratifyingly swift and overwhelmingly negative, from organizations like the National Collegiate Athletics Association (NCAA) which is headquartered in Indianapolis, to businesses like Yelp and Apple, to associations like the Indiana Chamber of Commerce [!]. After first saying that no changes were needed, by Tuesday, March 31, Gov. Pence was calling for a clarification that apparently would prohibit using the law to discriminate against members of the LGBTQ community.By the time this column appears such legislation may well have passed, or it may not. If it does, the political fallout would be severe for Pence (who apparently has been "thinking about" running for President [more than likely Vice-President]) and every Republican legislator who would vote for the roll-back. Certainly all the homophobic organizations listed above would be very unhappy with such an outcome as would individual homophobic business owners.

Not only Ted Cruz but that supposed "centrist" Republican Presidential candidate JEB somebody-or-other came out over the past weekend in full support of the law (and subsequently apparently took some version of opposition). Then all of the other GOP hopefuls, including that so-called "libertarian," named after some Jewish atheist, who happens to support the very contra-liberty "an embryo is a person" Constitutional amendment. Presumably they would not be unhappy vis-a-vis Pence, because a potential rival (or petitioner for the Vice-Presidential slot) would have removed himself from consideration. But any number of Repub. state legislators would be "primaried" right out of the State House because they "groveled to the gays and the media."In principle, Republicans all over the country just love this sort of legislation. That is why they have passed do many versions of it. Pull-backs occur only when business interests, often Republican-oriented business interests, realize what can happen and happen very quickly.But that doesn't stop Republican politicians, and the homophobic organizations to whom they are so beholden, from going to the next venue (like Arkansas where they were running into the Walmart buzzsaw, believe it or not) to try to get it done. These laws of course patently discriminate against classes of people based upon who they are, by nature. Outrage is most appropriate. The actions taken by businesses and organizations against such laws is most appropriate. But there is an additional very important point here. This is a matter that goes beyond just discrimination against certain individuals by other individuals. This is not simply a matter of a person saying "my religious belief is that LGBTQ people are sinful [or whatever] and on that basis I will not serve them," and it's OK to let them discriminate in the public square.Above that, in the realm of government and governance, is the very important matter of putting one set of religious beliefs above another. There are plenty of LGBTQ people who themselves are religious. While the homophobic religious types think that homosexuality and gay marriage are sins, obviously the religious homosexual folks don't. They attend church or synagogues or mosques on a regular basis. They are married in places of worship across the nation all the time. There are numerous gay clergy, who may themselves be married. But the Indiana civil government has said to the homophobes, your religion is better, is more highly valued, than theirs, and we will use the power of the state to protect and indeed promote your religious belief, as against theirs. At the same time, every business has one or more permits, licenses, certificates of occupancy, etc., granted to them under civil law. They pay taxes, under civil law. They operate under a whole series of regulations established by civil law. They receive benefits, like paved streets, sanitary sewage disposal and pure water supply, under civil law. Thus, by definition they fall under the requirements of the equal protection clause of the 14th Amendment to the United States Constitution. To permit one person or business to claim exemption from having to abide by the protections of the 14th Amendment based on their religious belief, as against another's religious belief, places the discriminator's religious belief on a higher level, gives it more value, than the religious belief of the person discriminated against. That's fine, within the confines of one's own home, one's own church, one's own media sources and outlets. But it is not fine in the public sector which is controlled by civil, not religious, law. Religious wars between Catholics and Protestants embroiled Europe for a century and a half from the time Martin Luther may or may not in 1517 have actually nailed his 95 Theses on the door of All Saints Church in Wittenberg. Although there were matters of political economy underlying all such wars, on the surface they were very much "religious" in nature. They did not indeed end until the religious war to end all religious wars, the Thirty Years War, which began in 1618, in fact ended in 1648 as very much a war of political economy, right on the surface. What Republican state legislatures are doing now would establish one religion as supreme over all of the others, with the power of the State to determine which is which. Above and beyond discrimination against one or more targeted groups of individuals, this is a recipe for a Second Civil War, not only about race, but now about religion.

The central issues of the First U.S. Civil War to this day remain unresolved. Then there is the over-riding issue of U.S. economic disparity and the ever-greater concentration of wealth, income and power, in the hands of an ever smaller number of people. Are we now to have Republican state-sponsored religious supremacy/determinism added to the mix? Is this not the recipe for a Second Civil War?

Steven Jonas, MD, MPH, MS is a Professor Emeritus of Preventive Medicine at StonyBrookMedicine (NY) and author/co-author/editor/co-editor of over 35 books. In addition to his position on OpEdNews as a â€œTrusted Author,â€ he is a Senior (more...)

Related Topic(s): Homophobic; Homosexuality; Legislation; Religious Extremism; Religious Hypocrisy; Republican; State, Add Tags
Add to My Group(s)
Go To Commenting
The views expressed herein are the sole responsibility of the author and do not necessarily reflect those of this website or its editors.