If Prime Minister Narendra Modi of India does not speak up on the issues that are tearing the nation apart, and if he fails to restore freedom to speak, eat, drink, wear and believe what India's constitution guarantees, and if he fails to warn the extremists in his party from destroying the social fabric of India, he will cripple the nation, making it a Langda India as we call it in Hindi.
For India to succeed as a nation, it has to stand on its own two firm feet; prosperity and social cohesion. The two are dependent on each other; one will not happen without the other. Indeed, prosperity will be short-lived if the social structure crumbles. 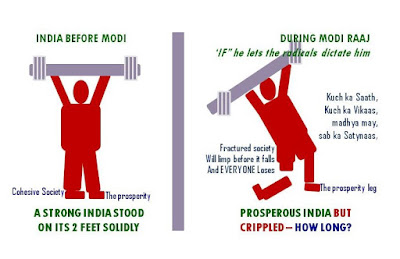 Copyrighted Image? DMCA
Bringing prosperity comes through raising income levels of all the sons and daughters of India; pulling the ones in ditches onto a level playing field to build a larger middle class and to expand the consumer base, whose consumption will create jobs, builds up the economy, and raise the standards of living. The more people do well, the better the nation does. Modi is talking big about it, and we can give him two full years to produce results.

Social cohesion on the other hand is like the cohesion in the human body, where the heart, brain, kidneys, liver, lungs, digestive track and all parts of the body need to function cohesively to live a normal life.

Failure of one organ can cause dysfunction in others. If you think the discharge part of the body is less important, wait till it stops, it will give headaches and will affect how we function. Likewise, all people in a society have to function cohesively, and it is in the interest of the body that it makes up for deficiencies in our part through a system of integration. As humans, and as Indians we have to meet those deficiencies in fellow Indians for the common good, and our own security and well being.


Remember, I cannot be safe if people around me are not, and if I threaten others, I am equally frightened at my vulnerable moments. No one will be safe, including Hindus who may not think much of the situation in India now, but eventually they will get hit too.

Those of you who are blinded by the love for Mr. Modi, I appeal to you to look for greater love for the nation. Modis will come and go, but the Nation will continue. I am challenging your patriotism; none of us want India to go down, so let our loyalty be to India and not Modi, until he proves that he can keep these two functions in shape, I will hold my praise for him, will you?
We have to be truthful and brutally honest. For the sake of the long term security of each one of us, we have to learn to openly express and listen to it with civility. We need to criticize the inept government and cut them down to pieces. Indeed, that is our patriotic duty to prevent our nation from falling apart.


I can never forget Indira Gandhi's emergency rule. Her goons got away with sordid acts of blackmailing, harassment and vandalizing. Now, I see a replication of the same under Modi. He lives in a bubble surrounded by Chamchas (sycophants) who say everything is alright" but everything is not alright.
I cannot thank Ramnath Goenka of Indian Express and others who went to jail instead of pandering to Indira. I cannot thank enough Mahatma Gandhi and the freedom fighters that took the beatings and went to jail for disobeying and criticizing the British colonial governments. God bless them! Because of them we have that freedom, and I thank all those men and women who are protesting and standing up against the goons.
Nehrus, Indiras and Modis will come and go, but India will continue and we have an obligation to save India. Indeed, by doing so, we are protecting the future of every Indian.

Do you remember the song?

Sikander bhi aaye, khalandar bhi aaye,
No koi raha hai, na koi rahega;
Mera desh azaad hoke rahega,
Mera desh azaad hoke rahega.
Those of you cheering for Modi now, will come to regret it, unless Modi gets his act together. All that prosperity will go down the tube if no one feels secure. When injustice waxes to the extreme, it will tear the nation apart; the rich will run out of the country for safety, and ugly communism may run in under the banner of redistribution of wealth and equalizing inequality.

It is time to wake up! Remember: Modi had given terrorists three days to finish their slaughter during the Gujarat Riots, and now he has probably given three years to finish freedom in India. Possibly the process has begun.
Thank God for the conscience of Indians! They are speaking up against bad governance. Modi better not mess with Narayan Murthy, Raghuram Rajan and Siddaramaiah, -- if he does, or does not stop inciting his goons, the whole nation could revolt.

I don't want my India to be a Langda India, do you? If we all wake up and criticize Mr. Modi, guess what will happen? He will be compelled to do the right thing. Don't you want that?


WHAT DO WE WANT?

He can address the nation this way; "I am the Prime Minister of all Indians. I will get blamed for the bad things that happen in India, and I am not going to put up with that. From this moment, everyone who messes with their fellow Indians will be punished severely, and if they have staged acts like the one in Dadri, everyone involved will be punished severely. This is my last warning and action will follow."

"Furthermore, I declare that no one will compel or tell other Indians what to read, write, eat, drink, wear or believe."

This is all we want.

Arise! Awake! and stop not till the goal is reached.
Swami Vivekananda must have meant this for Indians in 2015.