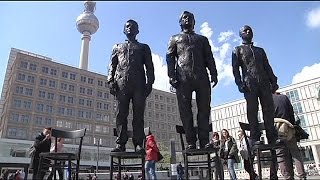 For the past 15 years, the U.S. government under both parties has invented whole new methods for hiding what it does behind an increasingly impenetrable wall of secrecy. From radical new legal doctrines designed to shield its behavior from judicial review to prosecuting sources at record rates, more and more government action has been deliberately hidden from the public.

One of the very few remaining avenues for learning what the U.S. government is doing -- beyond the propaganda that it wants Americans to ingest and thus deliberately disseminates through media outlets -- is leaking and whistleblowing. Among the leading U.S. heroes in the war on terror have been the men and women inside various agencies of the U.S. government who discovered serious wrongdoing being carried out in secret, and then risked their own personal welfare to ensure that the public learned of what never should have been hidden in the first place.

Related Topic(s): Media; NSA; Surveillance; Trump Presidency; Whistleblowers-ing, Add Tags
Add to My Group(s)
Go To Commenting
The views expressed herein are the sole responsibility of the author and do not necessarily reflect those of this website or its editors.