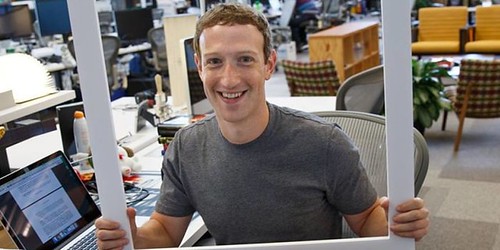 In spite of media sources swirling around right now, with discussions of fake news stories on Facebook about the Pope ostensibly endorsing Donald Trump, discussions of "trending" topics criteria that suppressed conservative news, how to fix fake news, etc., I must observe emphatically there are some media folk out there, both in the mainstream and in the alternative media, that are distinctly jealous of Facebook's massive effect on American politics, which I conclude is all for the best, a net very positive effect, one that will continue to grow and grow, for the main reason that it is honestly driven and motivated by reader and member participation.

Many media sources already recognize that Facebook is the #1 news media in the United States.

I speak both as a member of 955 Facebook groups, mostly dealing with Bernie Sanders, and as the creator of a Facebook group, Bernie Sanders: Advice and Strategies to Win in 2020. Having been involved in many political venues since I was 12 in the JFK vs. Nixon campaign in 1960, I can say categorically that there is no more rapid way to disseminate news than through Facebook. Facebook is, however, open to abuse, and it would be very easy to create and then post phony news. As a group administrator, I noticed this very frequently; there was always a breathless quality to it which gave these fake stories away before many people actually read them, like an implicit excited question as to "how many people are we going to fool with this one?"

I began to suspect that much of the origin of all of this was in Eastern Europe, since so many of the posts were by Macedonians and Serbs, so many that as an administrator, I had to remove several and then decline others to join the group. Was it ultimately KGB or GRU inspired, motivated, and driven? Indeed, now I surely think so.

The other extreme case, a possible anti-conservative news bias at Facebook, was reported months ago by Michael Nunez in Gizmodo:

I have written extensively about the Facebook restrictions on posting to groups. For example one here at OEN called: Facebook Suppression of Bernie Sanders Supporters?

The details are pretty nasty at times. I recall when Hillary "social media re-educators," funded by more than a million dollars from the Clinton Campaign, placed pornography on several large and important Bernie Sanders group pages in the last week of April, in fact the night before 5 state primaries, and got them shut down, causing great havoc and consternation. the next day, Hillary "won" 4 of those 5 states. Could this have had an effect on those elections? Yes, absolutely, when coupled with many other equally vicious strategies and disruptive tactics like purging voters, the worst of which was in NY state and yet the elected officials in Albany did nothing and basically "looked the other way."

Could Facebook have prevented that terrible night in April right at the start of the political mayhem? Maybe they could and should have, but they didn't, until far into the evening, when the pages were reinstated and put back up.

I am presently totally baffled by the presence on several of my pages of a man in Egypt who posts bizarre links in his perpetual advertising about famous people who have died or are about to die, and absolutely none of them are true! The first one I noticed was Clint Eastwood. Then there was Colbert, Bill Cosby, and dozens of others. This deranged poster/advertiser is paying good money to push out this total bullshit, and yet Facebook does absolutely nothing to correct, mitigate, or get rid of this guy. If you want to get rid of "fake news," get that guy off of Facebook.

[update, just this morning Nov. 16, these ads have depicted or implied that Chuck Norris, 50 Cent, Bruce Willis, Anthony Hopkin, and some other luminary have died or are on their death bed....how bizarre that Facebook takes money for this kind of bizarre advertising, all totally specious, and yet then "cracks down" on someone's article that might have gone to 21 groups in ten minutes, rather than the prescribed 20, with nothing about such limits posted anywhere?! Something is seriously wrong at Facebook to allow such glitches....]

Sure, Facebook has the technology and the apps to detect such things in error. I received several as creator and admin of my group, calling it "auto-reporting by Facebook." In every instance, I agreed that the post was BS and deleted them quickly.

Related Topic(s): Bank Investment In The Dakota Access Pipeline; Bernie Sanders 2020 Presidential Candidate; Facebook Bernie Sanders Advice And Strategies; Hillary Clinton Hatred And Hostility; Mark Zuckerberg; Pepper Spraying And Beating Native Americans; Trump Cabinet, Add Tags
Add to My Group(s)
Go To Commenting
The views expressed herein are the sole responsibility of the author and do not necessarily reflect those of this website or its editors.