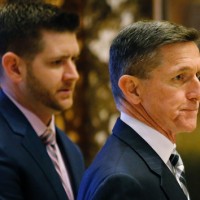 Michael Flynn Jr. is -- or WAS, until an hour or so ago -- a member of Donald Trump's presidential transition team. He also serves as chief of staff for his father, Michael Flynn Sr., who has been picked by Trump to be his National Security Advisor. Michael Flynn Jr. is also running a child sex ring in Trump Tower with Nazis and Klan members coordinated through secret codes published in stories on the Breitbart website. Or so I hear. If that's not true -- if Michael Flynn Jr. really isn't a child abusing Nazi pimp, then it is up to HIM to prove he isn't. Otherwise, this claim -- for which there is no evidence, by the way -- will "remain a story."

This is according to Flynn's own logic, and that of Trump, his child-abusing pimp of a former boss. (If Trump ISN'T a child-abusing pimp, he must PROVE it, even though there is no evidence that he is). For Flynn -- a top adviser to the top adviser to the incoming President of the United States -- says he will continue to push the story that Hillary Clinton is running a child sex ring out of a DC pizza parlor until the story is "proven false."

However, a quick look at the cesspool that is Flynn's Twitter feed (and the even more ghastly shithole of his account on GAB, where nazi perverts gather in a circle jerk of bile pumping) shows that any evidence offered to disprove the entirely specious "Pizzagate" story is immediately rejected by Flynn and his ilk as "false flags" or "leftist propaganda" or "MSM deceit," etc., etc. There is, in fact, no way on earth for anyone to "prove" the falsity of the story to Flynn's satisfaction. Until, of course, Daddy and Trump, the child-abusing pimp (if it's not true, PROVE it!) decided Junior was bringing too much media heat and ash-canned him from the transition.

But little Flynn's twitter-storm is in keeping with the Trump Truth doctrine, which holds that you can make any outrageous claim you like without the slightest bit of evidence to back it up -- and it's up to other people to prove that your specious bullshit is not true. This is how Trump injected the poison story of "millions of illegal voters" into the public discourse, forcing people to spend many hours and much energy refuting this bullshit -- even as "respectable Republicans" like Mike Pence and Paul Ryan (yes, I know, we are already 40 fathoms deep in a sea of toxic sludge when cranks and grifters like Pence and Ryan pass for "respectable" anythings) embrace this outright lie or see no reason to refute it. Why should they? They've got power now and intend to hold it by hook or crook, and to wield it to push their own aggrandizement, their racist prejudices, their psycho-sexual prejudices and their extremist, anti-human ideologies.

But to paraphrase another prime purveyor of baseless bullshit, Donald Rumsfeld, you go to war against oligarchs and fascists with the weapons you have, not the ones you wish you had. So I say let's pick up the weapon of the Trump Truth doctrine and use it against the scum who have risen to the top of the swamp water. Let Trump and Flynn and little tiny-pants Flynn Jr fight a barrage of bullshit stories about them and their kind -- even as we keep telling the truth about who they are and what they are doing. (Just as we've been doing with all the crimes of the Obama years.)

Because make no mistake: these fascists, these racists, these witless goobers and giddy slobberers with a child sex fixation will not be satisfied until the objects of their hate fantasies -- i.e., anyone who is not a slobbering witless racist -- are being attacked in the streets by "patriots" and police. They want lynch mobs, they want repression, they want violence -- and they are determined to get it. And they are about to have the resources of the most powerful state in the history of the world in their tiny-fingered hands.

So in addition to all the various solid works of resistance -- best exemplified by the water protectors at Standing Rock (but also by anyone who kicks a fascist in the nuts and makes him howl) -- let's keep a steady barrage of bullshit blowing back into the faces of these filth-peddlers.

Michael G Flynn
Until #Pizzagate proven to be false, it'll remain a story. The left seems to forget #PodestaEmails and the many "coincidences" tied to it.

Chris Floyd "@empireburlesque
@mflynnJR Until "Trump rapes 13-year-old" is proven false, it remains a story. Ask your dad to look into it, junior.

Chris Floyd "@empireburlesque
@mflynnJR All those pushing #Pizzagate are child abusers trying to divert focus from their own crimes. Until proven false, it's a story!

Chris Floyd "@empireburlesque
@mflynnJR Just checked out your GAB bile. Man, you are one sick racist child abuser. (Until you prove you're not, it remains a story.)

Chris Floyd "@empireburlesque
@mflynnJR Hey Flynn? Is GAB where all the child abusers like you (until you prove you aren't, it's a story) go to ply their sickness?

Related Topic(s): Deceit; Michael Flynn Junior; Propaganda; Twitter, Add Tags
Add to My Group(s)
Go To Commenting
The views expressed herein are the sole responsibility of the author and do not necessarily reflect those of this website or its editors.