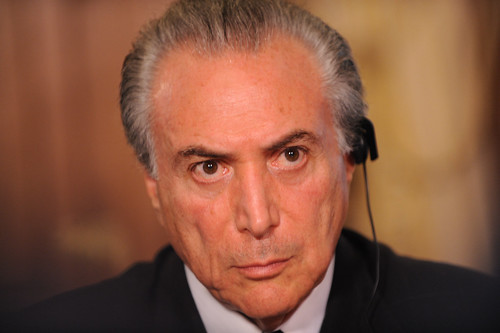 A PRIMARY ARGUMENT MADE by opponents of impeaching Brazilian president Dilma Rousseff was that removing her would immediately empower the truly corrupt politicians in Braslia -- the ones who were the driving force behind her impeachment -- and they would then use that power to kill ongoing corruption investigations and shield themselves from consequences for their own law-breaking. In that regard, Dilma's impeachment was not designed to punish corruption but to protect it. The last two weeks have produced new corruption scandals that have vindicated that view beyond what even its proponents imagined was possible.

In his short time in office, Temer has already lost five ministers to scandal, but these new controversies are the most serious yet. One major scandal involves an effort in Congress -- led by the very parties that impeached Dilma, with the support of some in Dilma's party -- to pass a law that vests themselves full legal amnesty for their crimes involving election financing. In late September, a bill appeared in Congress, seemingly out of nowhere, that would have retroactively protected any member of Congress from being punished for the use of so-called "caixa dois" (second box) monies in campaigns, whereby politicians receive under-the-table contributions from oligarchs and corporations that they do not declare.

Many of Brazil's most powerful politicians -- including its Foreign Minister, a majority of members of the lower House, and installed President Michel Temer himself (pictured above) -- are implicated in this scheme and are thus threatened with the possibility of prosecution. "Caixa dois" has been a key tactic used to bribe politicians. The issue has taken on particular urgency because the imprisoned billionaire CEO of the nation's construction giant Odebrecht, Marcelo Odebrecht, is about to finalize his plea agreement, and it will identify numerous key figures as having received millions of dollars in such undeclared donations.

It has already been reported that Temer's Foreign Minister, Jose' Serra, received R$ 23 million ($7 million) in such illegal funds from Odebrecht, much of which was deposited into a Swiss Bank account to avoid detection (those funds were for his losing 2010 presidential campaign against Dilma, showing how those who lost democratically and are mired in serious corruption are the ones who have now seized power due to Dilma's impeachment).

Related Topic(s): Brazil Corruption; Brazil President Michel Temer; Dilma Roussef; Dilma Rousseff, Add Tags
Add to My Group(s)
Go To Commenting
The views expressed herein are the sole responsibility of the author and do not necessarily reflect those of this website or its editors.