Of course, any good progressive knows that electing today's Republicans is a national exercise in self-punishment. And of course, Democrats--especially Blue Dog or "centrist" ones--are only too glad to tell you that. What they fail to tell you--and what only those who cherish principle over party can see--is that, given the rightward shift of both major parties, electing today's Democrats (especially the "centrist" ones) is almost as frightening an exercise in self-punishment. 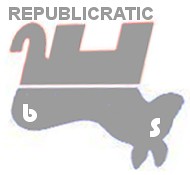 Why? Because what passes for "centrism," whether by Democrats or Republicans, is actually tacit endorsement of an insane status quo. A status quo that ever more becomes, with each electoral cycle that fails to enact desperately needed reforms, one of normalized extremism. And what most Democrats utterly fail to acknowledge--and failing to acknowledge major truths is dangerous--is the role their leading politicians, acting as "centrists," played in normalizing extremist policies.

Should we cite Bill Clinton's jobs-exporting NAFTA corporate bonanza, his authorization of Wall Street casino gambling through repeal of Glass Steagall, and his Iraq sanctions that caused massive Iraqi death and impoverishment? Or Democrats' craven knee-jerk rubber stamping of Bush's criminal Iraq War and freedom-destroying PATRIOT Act? Or Obama's normalization of the endless war on terror, impunity for fraudsters and war criminals, universal unconstitutional spying, police militarization, attacks on investigative journalism, support for Israeli injustice, criminally irresponsible "all of the above" energy policy, and hush-hush sovereignty-destroying trade deals? In all these cases, Democrats have played a major role in normalizing and institutionalizing destructive policies that can only be called extreme. Certainly we should add--since it's the core case of extremism underlying all Obama's others--the utter failure by Obama and leading Democrats to invest the scantiest effort or political capital in reversing Citizens United. Instead, leading Dems have adapted to the brave new world of political "pay to play" as comfortably as any Republican. Obama's ardent support for the raw corporate power grab of TPP fast track is the clearest case in point.

In Obama's case, what's probably accurate to say--and never gets said by subservient mainstream media--is that Obama's normalizing of extremism by far outweighs any good he's accomplished. And, on a longer historical view, that normalizing extremism is Obama's true legacy. And, finally and even worse, that the likely next president, whether Hillary Clinton or any Republican, will cement in place--perhaps irrevocably, barring a revolution--Obama's legacy of normalized extremism. With hastening loss of democracy and irreparable destruction of climate as the guaranteed results.

Now, did voters punish Democrats for these grievous failings--these real betrayals of public trust and democracy--in the 2014 elections? In a direct sense, almost certainly not. Almost all analyses of Democrats' 2014 electoral fiasco (like Andrew Schmookler's) focus on such factors as spinelessness, failure of most Americans to share at all in the recent gains of the economy, or Democrats' utter lack of a clear program or message, and those analyses seem right. But it's actually tragic that voters punished Democrats for those lesser failings rather than for the grievous betrayals underlying them. For while today's insane Republicans certainly didn't deserve to win, today's hideously compromised Democrats certainly deserved to lose, and it's a real shame third parties like the Green are condemned to electoral irrelevance in our rigged two-party system, where mainstream media conspire to never give their message a chance. And the conspiracy to ban Greens' message--or any principled progressive one--from our mainstream discourse is part and parcel of a larger plutocratic and Deep State conspiracy to ban truth, like the deep, unacknowledged destructiveness for which Democrats deserved far greater electoral losses. The tragic bottom line here is that average voters will never punish Democrats for a destructiveness they're never allowed to hear about.

As this writer is fond of saying, there's something deeply rotten in the state of "Demmark." And, given mainstream media's blackout of that important news, it's crucial that progressives seize the space publications like OpEdNews offer to air, for an enlightened vanguard, the ugly but desperately needed truth about our endangered body politic. And while grateful OEN is a democratic forum, open to varied progressive perspectives, I feel deep misgivings that a piece like Andrew Schmookler's (abetted by a top headline) had the popularity it did among OEN readers--a disheartening sense of how far OEN readers are from progressive vanguard status. For while Democrat Schmookler's piece of well-intentioned handwringing about why his party's dismal 2014 electoral showing surely deserves a place here, its popularity brings into question OEN readers' real progressiveness, their willingness to face hard truths about Democrats' sheer rotteness. For, assuming that rottenness as context, we progressives should be laser-focused on questions far graver for humanity than the electoral failings of deeply compromised Democrats. Like, say, why they're so deeply compromised in the first place. Or above all, what we as principled progressives--shackled by a disgusting two-party system and frankly disgusting Democrats as supposedly our party--can do to fix that.

My words will undoubtedly sound harsh applied to such a seemingly decent man, but--given OEN is a forum for discussing key progressive truths banned by mainstream media--an article by a Democratic politician (and therefore, inevitably, party apologist) like Schmookler, viewed through the prism of Democrats' deep rottenness, comes across as a "fluff piece." And its popularity in such a forum should have real progressives' shaking our heads, despairing of ever finding a radical enough vanguard for reforming our dismally dysfunctional political system. For hope of reforming that system--if any--will come not from party apologists, but from progressives willing to face Democrats with very ugly--and therefore very unwelcome--truths about themselves. If there's a real progressive vanguard here, articles rubbing Dems' faces in their party's regressive dirt should be the most popular.

Now, in highlighting the desperately needed truth of Democrats' deep rottenness, one could just reiterate the litany of Democrats' destructive acts from this article's third paragraph, perhaps adding items like Obama's illegal grounding of Bolivian president Evo Morales' plane, his persecution of a Yemeni journalist for reporting civilian deaths in Obama's drone strikes, or the role of Obama's FBI and "fusion centers" in crushing the Occupy movement. All, of course, are tabooed truths known to progressives but censored by mainstream Democrats.

But I'd rather do something more interactive and fun (if you can call it that) that forcefully boldfaces the deep, truth-allergic debasement of today's Democrats. Anyone who dares defend our current "jackass party" is strongly urged to visit the "Hillary in 2016 (For Intelligent and Like-Minded Individuals Only)" Facebook page, which, with nearly 120,000 likes, is one of the bigger pages supporting Clinton's candidacy. Despite its call for intelligent individuals ("like-minded" tells the real tale), the species of "torchlight rally" fascist groupthink that goes on there has nothing intelligent or individual about it. In fact, in a frankly bitter but perceptive moment, I christened it a "Blue Dog Democrat circle jerk." Do not go there inspecting intelligent discussion, let alone soul-searching, by Democrats; just try posting an "inconvenient truth" about Democrats, and you'll likely be regaled, like your humble author, with being called a "f*cking moron," "ass wipe," or "Confederate idiot."

One of the favorite pastimes of page creator David Simms is posting a picture of Jeb Bush or some even more repellent Republican and asking readers to describe him in one word--forcing them to be more concise in juvenile poop-throwing than they were with me. For true progressives, this pro-Hillary page, with its roughly 120,000 fans and "torchlight rally" fascist brutishness, is a shocking index of how far the party of FDR has now fallen. Clearly, Democrats will never again rise to those heights without some deeply distasteful soul-searching.

Progressives seeking to precipitate Democrats' urgently needed bout of soul-searching are strongly urged, in closing, to take two related actions. First, to like and follow the Pitchforks Against Plutocracy Facebook page, where we strategize to fight exactly the corruption by Big Money that's has made such a tragic farce of both our major parties. Second, to sign our MoveOn petition, which aims to give progressives a real voice among Democrats by urging Elizabeth Warren to drop her support for Hillary Clinton and run for president herself. For unless progressives can exploit the fault lines among Democrats by driving a wedge between Warren and Clinton, all we'll get is a fatal deepening under Clinton of Democrats' normalized extremism, with Warren serving as the useful populist idiot, the fig leaf covering that shameful--and dangerous--deepening. Only by demanding better from the likes of Warren--Democrats' populist "cover girl,"--do progressives have any hope of making Warren "cover girl" in the best sense: a "model of progressive makeover" for today's disfigured Democrats.

Related Topic(s): Corruption; Democratic; Democrats In Name Only Dinos; Democrats Progressive; Energy; Facebook; Fascist; Moveon; Obama; Petition; (more...) Plutocracy; Progressives; Republican; Sanctions; Spying; Truth, Add Tags  (less...)
Add to My Group(s)
Go To Commenting
The views expressed herein are the sole responsibility of the author and do not necessarily reflect those of this website or its editors.