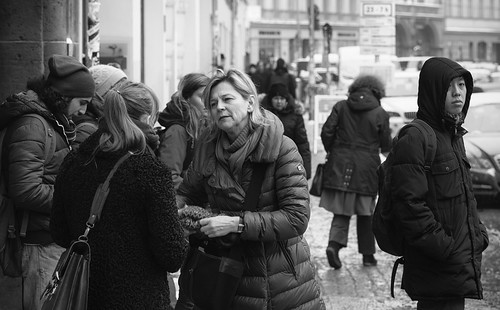 Truly listening before talking is crucial
(Image by kohlmann.sascha)   Details   DMCA
to talk someone out of voting for Trump is to stop trying to talk them out of voting for Trump. To all my fellow progressives who've been busily browbeating supporters of this dangerous demagogue, you're invited to become an early adopter of a far more rewarding, non-adversarial approach called "Powerful Non-Defensive Communication."

According to most commentators, the prototypical Trump supporter is an uneducated, narrow-minded bigot with legitimate grievances against the faltering economy that Trump has skillfully alchemized into violent rage toward non-whites, Muslims and successful women. The Trump voter is a patriarchal authoritarian primed since early childhood to fearfully submit to a bullying father who always knows best. In the circular logic of the authoritarian mindset, might makes right and so, Trump as the strongman is necessarily the winner in a competition against losers.

There is some truth in this profile, but it doesn't capture the nuances of experience, emotion and belief that are about to lead tens of millions of voters to pull the lever for Trump, including, as of July, 11% of Muslims , 13% of Latinos , 34% of women and significant numbers of professionals. Progressives tend to react to such information with groaning disbelief at which point we either give up or rededicate ourselves to enlightening the ignorant dupes with scads of facts that contradict the false narrative spun by Trump.

As anyone who's ever tried to reason someone out of their core beliefs knows, the mind filters out contradictory information, particularly the mind of an authoritarian whose panic button is stuck in the on position. Debating them and trying to convince them to dump Trump will make them dig in deeper-- that's what people do when they feel threatened. Also, as Newt Gingrich makes woefully clear in this John Oliver clip , everyone's got their own set of "facts" these days so flinging more facts back and forth is futile.

So what should we do instead? To answer this question, I contacted communication guru Sharon Ellison, creator of Powerful Non-Defensive Communication and author of Taking the War Out of Our Words . Ellison has trained thousands of educators, government officials and corporate and non-profit leaders, myself included, in a completely novel, straightforward style of communication that avoids the pitfalls of the conventional adversarial approach. She was credited with turning around a trailing gubernatorial campaign by training the candidate in powerful non-defensive communication, and her website teems with testimonials from trainees who've achieved communication and relationship breakthroughs they'd never imagined.

I asked Ellison for tips on engaging with Trump supporters in ways that encourage them to drop their mental defenses and rethink their position. The starting place, she says, is curiosity.

Instead of blasting Trump or insulting the morality or intelligence of his supporters, first, just get curious. You don't have to agree, you're simply gathering information and trying to understand where they're coming from, even if you believe they're deeply misguided.

Make it a dialogue, not a debate or an inquisition. No matter how true and rational your analysis is, force feeding it will not go down well. Nor will a pre-meditated series of sugar-coated questions designed to subtly lead the person to "get it." The right question, skillfully and non-aggressively posed, could prompt someone to gain unexpected insights, and when they realize something for themselves, they can more easily accept it.

Your questions should be very specific but posed in a non-judgmental way. (Note that I'm calling the questions "specific" rather than "pointed" which implies that a question is a weapon).

Ellison cautions, when talking to a Trump supporter, against the use of very general, open-ended questions--some of us gravitate toward these because they feel softer, but they can wind up serving as an invitation to rant. For example, my instinct was to ask Trump supporters what makes them feel afraid and how Trump makes them feel safe. I was envisioning a heartwarming scene in which the person shares his deepest fears and I empathize so beautifully that he then realizes that Trump poses an existential threat to the future of life on this planet. But the more likely outcome of my question, Ellison says, is that he goes off on a tirade about a racial or religious minority and I angrily storm out.

Below is a list of options for curiosity-based questions you could ask. It doesn't matter how the person answers your question(s)--the answer gives you important information as a basis for asking either another question or making your own statement. Later on, I'll show you how to follow up with position statements that express your beliefs in ways that can also disarm defensiveness.

"May I ask you something about what you just said?"

"May I ask about what you said when we were talking the other day?"

Erica Etelson is a writer and community activist at ericaetelson.com
Related Topic(s): 2016 Presidential Election; Donald Trump; Donald Trump Campaign; Donald Trump Lies, Add Tags
Add to My Group(s)
Go To Commenting
The views expressed herein are the sole responsibility of the author and do not necessarily reflect those of this website or its editors.

How to flip a Trump voter without trying

For a Bernie win, stop dragging Warren supporters through the mud