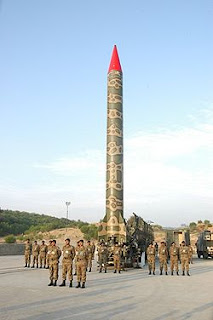 Copyrighted Image? DMCA
There is strategic perspective in all the bonhomie between Pakistan and China, which often gets missed out. Their nuclear and missile collaboration mechanism demonstrates the potential for global proliferation of missiles and fissile material if one throws in North Korea.

The scale of Chinese assistance to Pakistan's nuclear programme is unparalleled and little noticed, because the form of trade conducted spreads across several industries and capacities. From constructing nuclear plants with designs to providing the nuts and bolts for missiles, the Chinese have done it all.

Pakistan, China and North Korea have a full-fledged business in nuclear materials with the possibility of this being exported to other parties also.

Theft, smuggling, illegal acquisition and other felonies are the route Pakistan has adopted to lay hands on nuclear technologies from the West. In 2012, a Pakistani-American businessman from Maryland was convicted for illegally trying to obtain materials related to radiation detection devices, resin for coolant water purification, calibration and switching equipment, and attenuators.

Another expat Pakistani businessman, Syed Vaqar Ashraf, tried to follow the same route to get 18 gyroscopes for Pakistan's Drone programme. Luck deserted him and he was sentenced this September by a US court. He admitted to undercover agents that his client was Pakistan government and its' military.

Dr A Q Khan Research Laboratories, earlier known as Kahuta Research Laboratories (KRL)
(Image by historycommons.org)   Details   DMCA
China provides Pakistan with a whole host of nuclear materials and missiles. The Pak inventory of missiles is no more than a copy of the Chinese/North Korean missile. There is very little original in the Pakistani stuff.

The quid pro quo was that in return, Pakistan would share enrichment technology to North Korea. The North Koreans showed Pakistani model P2 centrifuges to nuclear expert Siegfried Hecker in 2010, confirming the exchange. Hecker, a former director of the Los Alamos National Laboratory, who visited Pyongyang in 2010, said that North Korea's progress in the uranium enrichment field was due to Pakistan's help with centrifuges.

That said, the Chinese must surely be worried that any linkages that get noticed between their State companies and Pakistan's illegal proliferation activities would attract US interest. Therefore, they have recently sought to play down all their links to Pakistan on the nuclear field in as far as purchases of materials and exchanges of information are concerned.

The face of Chinese assistance to Pakistan lies in blocking Indian actions against Pakistan, while the deeper more dangerous game lies in the supply of missile and nuclear materials.

The challenge of Sino-Pakistan ties for India and the rest of the world, is to convince the Chinese that relations with Pakistan may be okay in the short run, but would harm China itself in the long run. India should think of ways of breaking the nexus by offering Beijing something in return for a visible move away from Islamabad.

Clearly, this is going to be an uphill task but nevertheless worth trying. The other way out is for India to seek a triangular relationship with Japan and South Korea to counter the China, Pakistan, North Korea nuclear triad.

As of now, the Chinese backing is enabling Pakistan put up a brave face despite increasing isolation. China has just announced that they would block a Brahmaputra tributary and continue their 'technical hold' on the UN blacklisting of JeM chief Masood Azhar.

Terrorist interests are so deeply entrenched in the Pak state that it is next to impossible to rid the nation of the scourge. Lt. Gen. Asim Bajwa, the military spokesman, has claimed that there is no terrorist hideout on Pakistani soil! Well, Hafeez Saeed and Masood Azhar are not living in hideouts. They are visible on the streets of Lahore and Bahawalpur and on the small screen as also in print every day.

There is no reason for China to back a terror state. To do so continuously, there must be something more than meets the eye. For China, Pakistan is an ally whose assistance is needed to help it reach West Asia, both in geopolitical and geographical terms. Pakistan also provides China access to Afghanistan. Thus the grand plan for a China Pakistan Economic Corridor (CPEC) and all that it entails. The other side of the mirror shows China's overwhelming financial control over the Pak state because of the loans and grants that Beijing provides. This is in addition to the nuclear and missile deals. Therefore, there is little that Pakistan can do without Chinese support.