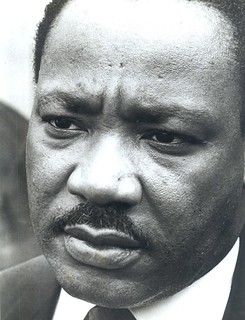 Like all false flag attacks and assassinations, the 1968 murder of Martin Luther King was covered up. In the King case James Earl Ray was the framed-up patsy, just as Oswald was in the case of President John F. Kennedy and Sirhan Sirhan was in the case of Robert Kennedy.

The King family, along with everyone who paid attention to the evidence, knew that they and the public were officially handed a cover-up. After years of effort, the King family managed to bring the evidence to light in a civil case. Confronted with the real evidence, it took the jury one hour to conclude that Martin Luther King was murdered by a conspiracy that included governmental agencies.

Martin Luther King, like John F. Kennedy, was a victim of the paranoia of the Washington national security establishment. Kennedy rejected General Lyman Lemnitzer's Northwoods Project for regime change in Cuba, opposed the CIA's invasion plan for Cuba, nixed Lemnitzer's plans for conflict with the Soviet Union over the Cuban missile crisis, removed Lemnitzer as chairman of the Joint Chiefs of Staff, and negotiated behind the scenes with Khrushchev to tone down the Cold War. Consequently, members of the military/security complex had it in for Kennedy and convinced themselves that Kennedy's softness toward communism made him a security threat to the United States. The Secret Service itself was drawn into the plot. The films of the assassination show that the protective Secret Service personnel were ordered away from the President's car just before the fatal shots.

King was only 39 years old and had established himself as a civil rights leader. The FBI convinced itself that King had communist connections and that the movement he led would develop into a national security threat. In those days, emphasis on civil rights implied criticism of America that many confused with communist propaganda. Criticizing America was what communists did, and here was a rising leader pointing out America's shortcomings and beginning to foment opposition to the war in Vietnam.

The conflation of justified criticism with treason is always with us. Not long ago Obama appointee Cass Sunstein advocated that the 9/11 truth movement be infiltrated and discredited before Americans could learn that they had been deceived into accepting wars and the loss of civil liberties. Before Janet Napolitano left her post as head of Homeland Security to become chancellor of the University of California, she said that the focus of Homeland Security had shifted from terrorists to "domestic extremists," which included war protesters, environmentalists, and government critics.

Throughout history thoughtful people have understood that truth is the enemy of government. Most governments are privatized. They are controlled by small groups who use the government to pursue their private agendas. The notion that government serves the public interest is one of the great deceptions.

People who get in the way of these interests are not treated kindly. John F. Kennedy and Martin Luther King were murdered. Robert Kennedy was murdered, because he knew who the government operatives were who murdered his brother. Robert Kennedy was well on his way to becoming the next President and implementing his murdered brother's plan to "break the CIA into a thousand pieces." If Robert Kennedy had become president, elements of the national security state would have been indicted and convicted.

The Warren Commission understood that Oswald was a fall guy, but the commission also understood that at the height of the Cold War to tell the Americans the truth of the assassination would destroy the public's confidence in the national security state. The commission felt it had no alternative to a coverup.

Experts' dissatisfaction with the Warren Commission led to a second inquiry, this time by the Select Committee on Assassinations of the US House of Representatives. This report, released in 1979, 16 years after JFK's assassination, was also a coverup, but the Select Committee could not avoid acknowledging that there had been a conspiracy, more than one gunman, and that "the Warren Commission's and FBI's investigation into the possibility of a conspiracy was seriously flawed."

In 1997 the John F. Kennedy Assassination Records Review Board released the top secret Northwoods Project submitted to President Kennedy in 1962 by the Joint Chiefs of Staff. The Pentagon plan was to murder US citizens and to shoot down US airliners in order to blame Castro and create public support for an invasion that would bring regime change to Cuba. President Kennedy rejected the report, a decision that increased the doubts of the national security state that Kennedy had the strength and conviction to stand up against communism.

Washington's response to the government's murder of Martin Luther King was to create a national holiday in his name. Honoring the man that elements of the government had murdered was a clever way to bring the controversy to an end and dispose of troublesome questions.

Related Topic(s): Assassination; Conspiracy; Deception; Government; Martin Luther King, Add Tags
Add to My Group(s)
Go To Commenting
The views expressed herein are the sole responsibility of the author and do not necessarily reflect those of this website or its editors.