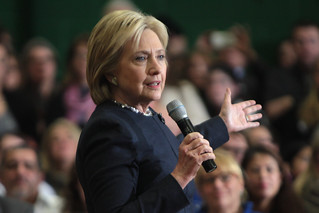 I first heard those fence-straddling words of wisdom from a wise old Chicago politician. It is a good way to approach the Hillary Clinton-Bernie Sanders race this early in the year.

Why not wait until a few more states vote before we agree on the strongest candidate to run against whichever Republican emerges from the hard-right options currently wallowing in the muck of the GOP primary and caucus races.

Strong support from minority voters in Nevada and South Carolina (on February 20, 23, and 27) could deliver twin victories to Clinton over Sanders. On Tuesday, March 1, voters in 13 states, American Samoa and Democrats Abroad, will make their decisions between the two Democratic opponents.

If that leader is Clinton, a nagging question must be asked:

Is she too military-minded for the Democratic liberal base she needs to win a general election?

Clinton may look like the strongest candidate to defeat any Republican. But will she take the nation back to the bellicose military policies favored by Israel and corporate military interests?

Is that a fair question? Maybe not, but Clinton's critics are asking it, and her strongest supporters are worried about it.

Sanders has the most enthusiastic supporters, but enthusiasm goes only so far. Regrettably, we know little about Sanders' foreign policy views. We do know a great deal about Hillary Clinton's record.

Stephen Zunes wrote an essay for the Cairo Review of Global Affairs which offers troubling reminders from her record.

Zunes is professor of politics and international studies and program director of Middle Eastern studies at the University of San Francisco. His essay is entitled "Hillary the Hawk."

He argues that a President Clinton would push this nation back toward militarization of the problems she has faced as Secretary of State.

"If Clinton wins the American presidency in 2016, she will be confronted with the same momentous regional issues she handled without distinction as Obama's first secretary of state: among them, the civil war and regional proxy war in Syria; the Syrian conflict's massive refugee crisis; civil conflict in Yemen and Libya; political fragility in Iraq and Afghanistan; Iran's regional ambitions; the Israel-Palestine conflict; and deteriorating relations with longstanding allies Israel, Egypt, and Saudi Arabia.

"There are disagreements as to whether Clinton truly embraces a neoconservative or other strong ideological commitment to hardline policies or whether it is part of a political calculation to protect herself from criticism from Republicans who hold positions even further to the right.

"But considering that the Democratic Party base is shifting more to the left, that she represented the relatively liberal state of New York in the Senate, and that her 2008 presidential hopes were derailed in large part by her support for the Iraq war, it would probably be a mistake to assume her positions have been based primarily on political expediency.

Related Topic(s): Bernie Sanders; Democratic; Hillary Clinton; Israel; Issues; Policies, Add Tags
Add to My Group(s)
Go To Commenting
The views expressed herein are the sole responsibility of the author and do not necessarily reflect those of this website or its editors.