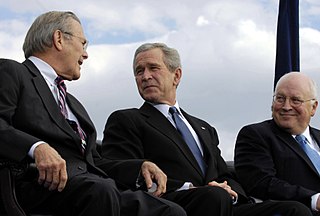 I'm a Texan. I like beer, bar-b-que and pitchin' horseshoes. I like people. I always said that I hated George W. Bush's politics but that I wouldn't have had a problem drinking a beer with him. I would still have a beer with him but it would be in a secluded spot somewhere or in public in a real heavy disguise. Hillary just attached herself to the Bushes, father and son. A very savvy political move if you're trying to win over possible Republican crossover voters. BUT WHAT IN THE HELL DOES IT SAY TO YOUR PROGRESSIVE CONSTITUENCY!

My mother sat next to George H W Bush on a flight to Hawaii back in the 60s. She said he was a real nice man. She likes people too and I think she's probably right. My mother would probably have a beer, although she prefers martinis, with his son George W; however, she would scold him loudly and pinch him till he screamed! Her grandson went to his war.

I think we all get Hillary's point and we sure wish that there was more congeniality and collegiality amongst the Republican candidates. However, when did the Democratic candidate take it upon themselves to embrace the other team during an election to ease their pain and make a show of solidarity? This election cycle has certainly not been an exercise in etiquette or manners on their part; why start now? The Republican's candidate is a pig and Hillary need not be a swineherd.

The two former Presidents were at the top of their party for how many years? And now they are appalled at what they validated, acquiesced to and most probably supported -- the turning of their beloved party into a shattered mess being represented by a neo-fascist pr**k? This is what you get when you pander to unstable religious zealots, gun fetishers, homophobes, men that like to run around in the woods with guns and pretend they're soldiers, small government as**oles with, what used to be, fourth-grade educations that listen to other small government as**oles with PHDs, a lotta folks from Texas, every sorry son of a gun at FOX NEWS, and on and on.

It's the sh*t when you cynically go to bed with the Cast of "Duck Dynasty" and then wake up with the cast of "Duck Dynasty", isn't it? The Bushes' Ivy League pedigree doesn't protect them from being complicit in the hillbillyizing of their party. It's like my Granddaddy used to say, "Son if you lay down with dogs you'll get up with fleas." Maybe this one applies better to the current situation: "Boy, you can pick your nose and you can pick your friends but you can't put your friends under your saddle."

Thank goodness for the poor Bushes -- Hillary has come to the rescue. The poor Bushes would have continued to languish in the lonely netherland of sane, educated, rational, friendly Republicans if not for her. Now they have a candidate to support and have dinner with; a dinner guest that can even read the menu.

In my heart I applaud her show of civility and probity. However, this apparently generous and kind act of hers exposes something unsettling about the reality of it: political cronyism amongst political dynasties is alive and well in The United States of America.

Isn't this one of the issues that is firing up the populism amongst the followers of both Bernie and Trump?

I understand cynical political acts of presidential race expediency. This unfortunately was a genuine act of camaraderie. These folks like each other. I also really appreciate this -- I said earlier that I would drink beer with George W. However, If you had any doubts about whether Hillary would become more populist or progressive -- I think you can quit worrying about that now.

Related Topic(s): Bush; Bush Admin; Bush Cabinet; Bush George Herbert Walker; Conservative Republican; Donald Trump; Hillary 2016; Hillary Clinton; Iraq War; Republican, Add Tags
Add to My Group(s)
Go To Commenting
The views expressed herein are the sole responsibility of the author and do not necessarily reflect those of this website or its editors.