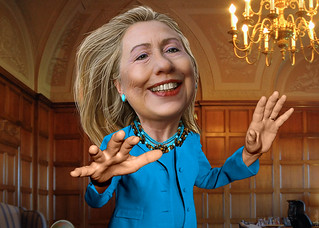 Hillary Clinton - Caricature
(Image by DonkeyHotey)   Details   DMCA
Forbes magazine ("the capitalist tool") doesn't always paint a rosy picture of capitalism, except (as does The Wall Street Journal) in its editorial and opinion fluff. But capitalists want the actual lowdown on how the system is working and where it's going and Forbes job is give them the info they need to pace their bets.
Working people and progressives can bet the capitalists are not betting on Bernie Sanders; the money-bags crowd is betting on Clinton (with few exceptions) all the way. Some of Clinton's ideas are even too pro-capitalist for Forbes!
The magazine recently held a "healthcare summit" as big capital is aware the cost of drugs is getting out of hand and is ultimately unsustainable. They certainly don't want some social-democratic president mucking around with their system so they want to control the proposals that will have to be made to make the system work for more people and still allow them to reap ill-gotten gains.
Hillary Clinton has two proposals on the table that Forbes doesn't particularly like because while they make modest changes in the health-care system they end up giving poor people the short end of the stick and benefit the rich. But that is the very problem that has to be solved! Creating a system that doesn't let people die because they are poor. As usual Clinton's supporters don't really understand whose side she is on; they are the same as Trump supporters in this respect. Even some of those on the authentic Left -- Communists and Socialists -- don't understand that she represents the interests of monopoly capitalism better than any Republican could.
Well, what are her proposals to better the system (she totally rejects the Medicare-for-all ideas of Sanders)?. Her position is not "Medicare for All" but "Medicaid for More." Medicaid is cheaper and doesn't have all the benefits of Medicare so health care won't cost so much if poor senior citizens who are on Medicare due to their ages are switched over to Medicaid, leaving only the wealthier seniors on Medicare. That's right folks, the first would-be female U.S. President is a grinch!
Here is how Forbes puts it: "How do we fix pharmaceutical pricing? Hillary Clinton's idea of making drug firms pay a tax if they don't spend enough on R&D probably wouldn't lower prices. And her other idea of making seniors who are eligible for both Medicare (health care for seniors) and Medicaid (the program for the poor) take Medicaid would result in savings, but it could also mean giving rich people better health insurance than poor people." Forbes is being nice in using "could" for "would."
So there it is: Clinton the "progressive," the "realist," proposing the same old same old; let's "solve" our drug-pricing problems by tossing the poor under the truck and not bothering the rich. Wake up dupes! We have one chance this year to actually make a change in the system and that's to vote for someone 90% of the political class and the corporate media oppose, the ONLY candidate that actually represents the vast majority of the American people and is not a cat's paw for then wealthy 1%. It's time for all unions and people's movements to turn their backs on their faux-progressive leaderships who have sided with Clinton and the 1% and support Bernie Sanders -- your grandchildren will be grateful for having a future.

Related Topic(s): Capitalism; Clinton Campaign; Drug Cartels; Drug Policy Racist; Forbes; Healthcare; Medicaid; Medicare; Seniors, Add Tags
Add to My Group(s)
Go To Commenting
The views expressed herein are the sole responsibility of the author and do not necessarily reflect those of this website or its editors.