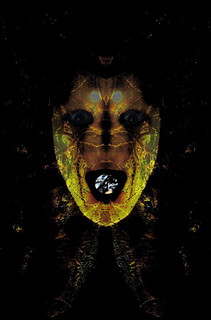 Just a quick thought: when did America become a nation of such gutless, frothing cowards? Induced panics -- political, "moral," financial, etc. -- are an endemic feature of American history, of course. But to see people positively revelling in their cowardice -- proud of it, boasting of it, building their lives around it -- as they are today seems like something new, in degree if nothing else. Certainly since the McCarthy days, at least.

For example, I lived through an era when a global superpower had a vast nuclear arsenal on hair-trigger alert aimed directly at the US -- yet there was nothing remotely like the level of quivering fear we see today over the extremely remote threat of some isolated terrorist incident here or there. (A threat more remote than, say, being killed by a right-wing extremist, a disturbed person with easy access to guns, a local policeman -- or even your next of kin.)

There are many factors behind this, I suppose -- not least the frenzied and mendacious fearmongering of that nation-poisoning trash-merchant, Rupert Murdoch. But all of our corporate media have moved in that direction. Because fear serves more than just Fox's bottom line or the political fortunes of sinister clowns like Trump (and Cruz and Rubio and the Bush Boys and the whole sick crew).

I think fear is being promoted across the board to "justify" an entire political-economic system that is now geared almost entirely to rampant militarism and rapacious financial elitism. No system of such vast and growing inequality -- coupled with an ever-expanding military-security-war profits complex that is bankrupting the national treasury, stripping away constitutional liberties, and fomenting extremism and violence around the world -- can long survive, unless it keeps people in a constant, chaotic whirl of fear and panic: fear which must be directed outward, toward one sort of alien OTHER or another (Mexicans, Muslims, Commies, Russkies, Chinese, radicals, etc.). Anything to divert attention from the crimes and corruption of our own power structures, which are wreaking more destruction on "the American way of life" than any terrorist organization could ever do.

It's not surprising that people would be influenced by such a relentless barrage of fearmongering lies, distortions and exaggerations pouring down on their heads every minute of the day from the "commanding heights" of our society. But it is disheartening to see how eagerly and zealously so many Americans are rushing to embrace the degradation and servitude our "betters" are striving to impose.

Related Topic(s): American Terror; Corruption; Fear As Policy; Violence, Add Tags
Add to My Group(s)
Go To Commenting
The views expressed herein are the sole responsibility of the author and do not necessarily reflect those of this website or its editors.