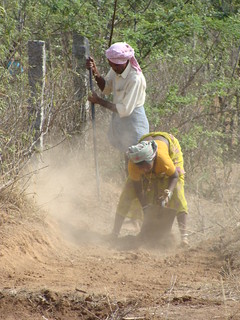 (CNS): It is not uncommon to hear about tales of migration from villages to cities in search of greener pastures. But, 22 years ago, a quirk of fate trans-located 42 years old Preeti from the city of Gorakhpur to a village called Bantaaniya. The youngest of 5 siblings--3 sisters and 2 brothers--Preeti grew up in Gorakhpur, a town in east UP, India. She had a comfortable childhood as her father had a government job in the railways.

She had never felt that her parents discriminated between sons and daughters until, soon after her mother's untimely death, she was married off in a rural family, much against her wishes.

Preeti recalls the trials and tribulations, which her marriage at the tender age of 18 years brought upon her. She had to leave the comforts of an urban life to embrace the hardships of the rural household of her husband. She had just passed class 10 and wanted to continue with her education. But she did not have the courage to go against her father's and brothers' wishes who believed that there was no point in educating girls as they were not supposed to take up a job. They thought it best to get rid of their responsibilities by marrying her off. Like a dutiful daughter, as girls are supposed to be, she meekly sacrificed her dreams to enter a new and difficult phase of her life at a very young age.

Her marriage was a big letdown for her. Her in-laws were basically farmers and not very well off. It was a joint family of parents-in-law and her husband's four brothers. She had no option but to fit into the framework of a docile and shy daughter-in-law and abide by the wishes of her elders. She lived in a mud house (with no toilet) whose rooms would flood in the monsoons, so much so that there was no place to cook food. This was in stark contrast to her brick-walled house in Gorakhpur with all basic facilities.

She mostly stayed indoors and was too immature perhaps to even think of women empowerment. It was a difficult life in the village and she was forced to endure it--where else could she go with her 3 kids--2 daughters and 1 son. But when the going became very tough she and her husband separated from the rest of the family.

Her work as a farmer