"There are many unique characteristics to the Donald Trump story but the institutional evils that permeate this country persist no matter who sits in the oval office." 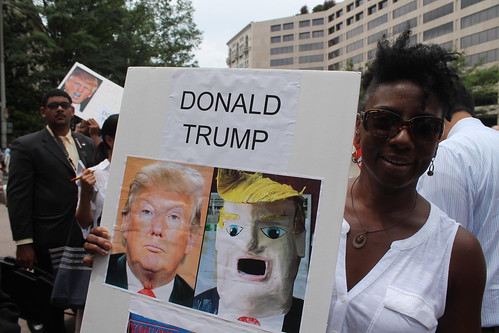 Thousands of progressives are taking to the streets in opposition to the Donald Trump presidency. After eight years of Obama induced slumber they awoke with quite a start. Many of these individuals and organizations protested as part of the anti-war, Occupy and Black Lives Matter movements, but others weren't concerned about very much until the reality show host became president elect.

The awful Hillary Clinton should be inaugurated the 45th president of the United States because she won the popular vote. But for the second time in less than 20 years a Democrat preferred by the people will instead be an historical footnote. If nothing else the Electoral College is rightly condemned.

But where else should protesters direct their anger? If they are concerned about fascism they could protest police killings, or United States government murders committed during numerous interventions abroad. They might have risen up against the mass incarceration state. The list of outrages that should get people moving is quite long.

White liberals here in New York City didn't care very much when black and brown residents were subjected to nearly one million police encounters. Mayor Bloomberg's infamous stop and frisk program was a tailor made opportunity for public anger. Yet every poll indicated that white people were in favor of this very fascist 21st century slave patrol. Those same people are now upset but what exactly has raised their ire?

"Trump is no more hostile to the rights of the press than Obama was."

They say they are concerned about the rights of undocumented people but they didn't say much when Obama acted as the Deporter-in-Chief. The so-called Muslim registry of men from 25 countries under the auspices of the NSEERS program lasted from 2002 to 2011. That is to say during two years of the Obama administration. They may be concerned about climate change and Trump's promise to end America's participation in the most recent climate agreement. But that agreement allows for a rise in carbon production and thus in world temperatures. They would have been smarter to challenge the phony climate change process itself.

They say they are afraid that Trump will muzzle the press. His shouting match with network executives should not be a cause for alarm. Eventually they'll start saying good things about him so he was foolish to be so hostile. But he is no more hostile to the rights of the press than Obama was. When he used the Espionage Act to punish leakers and whistleblowers many of the now distraught progressives didn't say much.

So what has gotten progressives so angry? There is nothing new about the so-called alt-right movement. There is always a way to brand white nationalism. They may be the Tea Party one day and alt-right the next but it all amounts to the same thing. The dictates of white supremacy are ever present and the numbers of white people who do anything serious about it are small.

If the sight of naziesque salutes to Trump are upsetting, just keep in mind that there is an ample supply of domestic fascists. They are the people who wear police uniforms. They may not "hail Trump" or anyone else but they kill three people in this country every day.

"Barack Obama and Eric Holder quite literally kept thousands of black people in jail who could have been freed."

Donald Trump should be given credit for providing so much low hanging fruit. His appointment of Jefferson Beauregard Sessions to the post of attorney general provides ready made ingredients for fear and anger. Sessions was once denied a federal judgeship in part because of racist remarks directed at a black attorney. And who can ignore the glorification of the Confederacy in his name. But what did Obama and his two black attorney generals do? There were no prosecutions of killer police. That fact is a curious one in the age of murder caught on video. The Obama Justice Department argued against giving the right to request re-sentencing for those convicted during the years of draconian drug crime prosecution. Barack Obama and Eric Holder quite literally kept thousands of black people in jail who could have been freed.

It is difficult to take protesters seriously when they won't even direct their anger at the party which displayed such gross incompetence during the recent campaign. The inability to defeat the man who seemed so unsuited to the presidency should stir anger towards the people whose hubris brought him to the White House.

There is always a need to engage in struggle, whether a Republican or Democrat is president. There are many unique characteristics to the Donald Trump story but the institutional evils that permeate this country persist no matter who sits in the oval office. We can gauge the true level of concern about justice when a Democrat next emerges victorious. A president who provides a greater opportunity for scorn should not be the last one who faces opposition.

Related Topic(s): Freedoms; Protest; Trump Insults; Trump Protesters; Trump Victory; Whistleblowers-ing, Add Tags
Add to My Group(s)
Go To Commenting
The views expressed herein are the sole responsibility of the author and do not necessarily reflect those of this website or its editors.