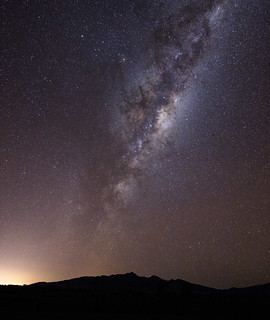 Look at the night sky and you will see matter as it was from a second and a half ago to, they say, thirteen point eight billion years ago, depending on from where it is observed.

Say "now and now and now", and at each 'now' the earth and you with it will have moved twenty miles along earth's orbit around the sun, the sun will have run a hundred miles along its circuit of its galaxy, and the galaxy will have moved two hundred miles towards its appointment with Andromeda, and God only knows how far from the purported 'big bang', in the existence of which the inventor of the term did not himself believe. Technically, each previous 'now' should really read 'then', thus depicting the conundrum of 'time', with the latest 'now', even as you utter it, sliding inexorably into 'the past' as your material and its senses move, as you see described, across the dimension of space; but enough of that, as the intention is not to confuse. Phyically you will just experience one second.

So it is only the position from which you look, and the senses with which it is seen, that gives the impression of 'time' and 'action' in Universe. The future is also as physically present, but the position of view is not physically advanced enough in the physical dimension of space to witness it. However, as 'the past' was the inscrutable 'future' of all the position beyond it, so also 'the future' is only 'the past' of all the space beyond it. So it may be seen that all Universe already exists, in its totality complete, perfect and immutable, with only the senses of living creatures affording the impression of 'time' and of a Universe 'in action'. Think about it.

During our little span here, we see what we call "the present" as provided by the senses resulting from the inextricably integral molecular activity of our metabolisms. The rate of appreciation varies from human infancy to old age by a factor of perhaps ten, while that of microbes may be sufficiently rapid to view light in movement. Whether or not one persists in universal space after one's limited span finishes cannot be known even in theory, despite the claims of those of 'near-death' experience but, if so it would be in 'time'less space, which would be experienced as what we here and now understand as 'eternity'.

Thus it will be seen that Universe itself varies in concept from the sublime simplicity of its totality to the incomprehensibly-complex view of the single action of universal molecular and atomic detail in 'time', again depending on viewpoint. However, Universe may be seen as already complete, though it may seem otherwise to us as our temporary experience of it, too, is, as stated, an integral part of its process of completion.

Aged beyond belief, with a fund of experience that few could challenge and fewer envy, and with the wealth of information and expertise that goes with it, the author is a lifelong specialist in differentiating reality from unreality. A (more...)

Related Topic(s): Time; Universe, Add Tags
Add to My Group(s)
Go To Commenting
The views expressed herein are the sole responsibility of the author and do not necessarily reflect those of this website or its editors.

Are the Banks Scamming Us?

Madness and Miracles in Central France