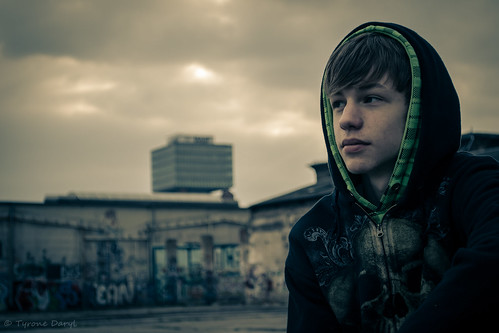 Thinking about the future.
(Image by Tyrone Daryl)   Details   DMCA

I think, for the sake of our youth, someone other than the two major candidates needs to be America's next president. Even if it's too late.

Everyone will then have to define for themselves what that means about who we are. What that means about leadership and about America's leader. This can be done in a healthy way, even if Clinton or Trump win, but it won't be easy. And it's unlikely that we'll choose healthy, anyway.

If one of the third party candidates becomes the next president it will be easier to teach ourselves and our children valuable and healthy lessons about leadership, about ourselves, and about America. Honestly, I think it's easier to find a healthy answer to "Who's that?" when our kids and students ask about the new president than "Isn't that the one that's supposed to be locked up?" or "That's the guy that grabs vaginas, right?"

Policy matters. It does. But the message matters most. We tend to insist on policies that match the messages we have been taught or awakened to believe. We must focus on the message we're sending.

Full disclosure, I can't vote. I'm not American. So my thoughts are honestly an outsider's thoughts (albeit an outsider who has learned to love a lot of things about this country she now lives in). And of course, because I am me, my thoughts are slanted toward a parenting perspective. But the youth are the future. They are brilliant and creative and actively deciding who they are and what they want to become. They are our most valuable asset. It only makes sense to consider them most.

The message matters. We will weave reasons for how and why we choose our leadership based on who becomes the next leader. And if the next leader has been exposed as dangerous scum (whether warranted or not), well, the reasons we come up with for why they are the leader are more likely going to be dangerous, too.

I know it's likely too late. But I don't think we should let it be. It matters too much.

However, if the next president is either Hillary Clinton or Donald Trump, I invite all of us to work our best to create an emotionally healthy, forward thinking, connection oriented, respectful and encouraging message. It can be done, I'm completely confident that it can be done if we insist on it.

I'm exhausted and bruised from all the cruelty. My sons are, too. But it's them I worry about most because they are still deeply in that building themselves and their understanding of the world phase. Teens and young adults. Our youth needs us to step up right now.

As the mother of four wonderful teenage boys Tsara spends a lot of time figuring out who she is so she can teach her sons to do the same. She also hears herself holler, "Stop Eating!" an awful lot! As her boys get older, she gets louder while (more...)

Related Topic(s): America; Clinton Campaign; Future; Message; Policies; Policy; Trump Campaign, Add Tags
Add to My Group(s)
Go To Commenting
The views expressed herein are the sole responsibility of the author and do not necessarily reflect those of this website or its editors.

Because My Mom Was Autistic, Our Answer Was Autism

You See, to me, it's all about Value

What I Was Thinking When I Raped You

No Means No - And Even More You Need Permission