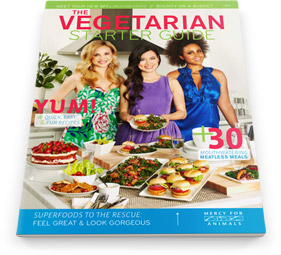 I read with great joy Nathan Runkle's introductory piece in Mercy for Animal's magazine: Compassionate Living. If you care about animals, you too will appreciate his kind and thoughtful remarks. His first paragraph deserves quoting:

"We're winning. There's no question that our movement has reached a critical point--time during which we achieve victories for animals every single day. Large and small, these daily triumphs coalesce to form a force to be reckoned with on all fronts of our battle."

What wonderful news because MFA and other animal rights groups have been fighting this battle for compassionate treatment of America's farm animals for a long time. Though the fight isn't over by a long shot, there are encouraging signs. Runkle mentions some of them where he largely praises the millennials - 12 percent of whom consider themselves vegetarians.

Largely because of them meat consumption has dropped in America by 10 percent. And as he so well puts it, "their collective, compassionate might has meat, dairy, and egg companies scrambling to recover from falling demand".

Though a Depression baby myself, I am glad to also align myself with this compassionate generation, though they probably were not even born when I adopted my vegan lifestyle. So all of us, no matter from what generation we come, but whom are adopting a vegetarian or vegan lifestyle are creating a brighter future for the animals by buying products which reflect our morals.

Runkle also notes that the market for vegan food is bigger than ever and growing rapidly. Analysts predict that by 2054 meat alternatives may claim a third of the protein market. Though great news, I hope this growth will happen way before then. I, and probably some of you will not be around in 2054, but my concern is that it should not take so long for us to adopt a more compassionate vegetarian or vegan lifestyle.

While Arnold Schwarzenegger does not profess to being a vegetarian, but at least in Paris he acknowledges that there is a need to reduce meat consumption, because of its impact on the climate. In one of his talks on Global Warming he advocates giving up meat once or twice a week. He feels most people will feel comfortable this way rather than doing without meat entirely. This is not earth shaking news for those of us who have given up all meat and dairy, he does note however that most of the debate on climate change focuses on industry, while failing to take into account emissions associated with meat eating.

When asked about the impact of body building without a meat diet, Schwarzenegger replied that many successful body-builders avoid meat. He also remarked that we can get protein in our diet in many different ways and that he has known many body-builders and weight lifters who are vegetarians. It has got to be a boon for the case of vegetarianism to have remarks such as these coming from the "Terminator".

While his friend recommended he tell his Parisian audience to stop eating meat entirely, Arnold told him that while it's a good idea, most people will not accept it. So he opts for the doable challenge of not eating meat at least one or two times a week. Hopefully he feels that this practice will be enough to decrease the copious amounts of harmful CO2 emissions caused by meat farming. In the long run, eating less meat will also help decrease the number of animals suffering in factory farms and slaughterhouses. And though not mentioned, it will also help us to be healthier people as well.

From Christie Middleton was "The Chicken in the Room at the Paris Climate Talks". She hopes that, like Schwarzenegger, the Ambassadors of the world convening in Paris will not ignore the mounting evidence that we need a massive global reduction in greenhouse gas emissions. I also agreed with her when she wrote that we may not all be diplomats who can create international policy, but that as consumers "we all have a tool at our disposal that can make a huge difference. And that tool is our forks and knives".

Middleton cites an irrefutable fact on why we should be concerned about trying to give up meat: "The livestock sector is already responsible for 7.1 gigatons of CO2- equivalent a year greenhouse gas (GHG) emissions, just under 13 percent of the global total, and equivalent to tailpipe emissions from all the world's vehicles." Quite a frightening statistic if you care about our atmosphere.

She further notes that if we are going to avoid climate change, it is clear that we need a global solution for ending factory farming. By raising and slaughtering billions of animals for food each year, we are using the single largest human use of land which ultimately contributes to soil degradation, dwindling water supplies, and air pollution. Simply put, we cannot curb climate change without making some serious changes to our diets by eating less meat and by replacing animal products with food from plant sources. She also believes that we should also try to purchase from farmers who are more humane and who use sustainable methods.

For me her post is illuminating and factual. I hope that anyone who is serious about this matter will research it further on the internet. And for those of us who also care about farm animal suffering as well, I hope you support groups like Mercy for Animals. You might want to go to the internet and view MFA's latest edition of Compassionate Living.

Related Topic(s): Climate Change Agreement; Consumption; Diet; Farmers-Farming; Health; Meat; Millennials; Schwarzenegger; Suffering; Sustainable; (more...) Vegan; Vegetarian; Water, Add Tags  (less...)
Add to My Group(s)
Go To Commenting
The views expressed herein are the sole responsibility of the author and do not necessarily reflect those of this website or its editors.