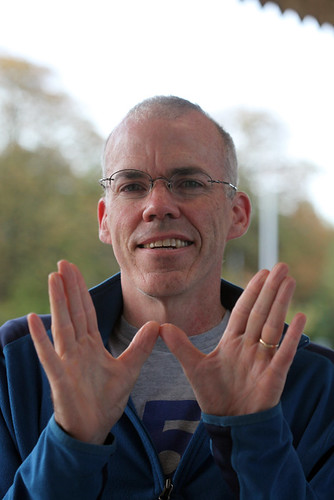 MIDDLEBURY, Vt. -- THERE are shameful photos of me on the internet.

In one series, my groceries are being packed into plastic bags, as I'd forgotten to bring cloth ones. In other shots, I am getting in and out of ... cars. There are video snippets of me giving talks, or standing on the street. Sometimes I see the cameraman, sometimes I don't. The images are often posted to Twitter, reminders that I'm being watched.

In April, Politico and The Hill reported that America Rising Squared, an arm of the Republican opposition research group America Rising, had decided to go after me and Tom Steyer, another prominent environmentalist, with a campaign on a scale previously reserved for presidential candidates. Using what The Hill called "an unprecedented amount of effort and money," the group, its executive director said, was seeking to demonstrate our "epic hypocrisy and extreme positions."

Since then, my days in public have often involved cameramen walking backward and videotaping my every move. It's mostly when I travel (I've encountered them in at least five states so far, as well as in Australia), and generally when I'm in a public or semipublic space. They aren't interested in my arguments; instead, these videos, usually wordless, are simply posted on Twitter, almost always with music. One showed me sitting in a church pew, accompanied by the song "Show Me That Smile." The tweet read, "Ready for his close-up."

Someone also went to the archive at Texas Tech University, where my papers are stored, and asked for copies of everything in all 54 boxes. He identified himself as being with a group that is affiliated with America Rising Squared.

This effort has resulted in all kinds of odd things appearing on right-wing corners of the web: out-of-context quotations from old books and articles apparently put on display to prove I'm a zealot, and photos from God knows who intended to make me out as a hypocrite (the plastic bags, for instance, and my travel by car, which, you know, burns gas). Mostly, they've just published those creepy videos, to remind me that I'm under surveillance.

I understand that this isn't horrible in the way that police brutality is horrible, or having your home swept away by a flood is horrible. I know that in other parts of the world, environmentalists have worse things than cameras pointed at them. From Honduras to the Philippines, in the last two years, activists have been assassinated after getting in the way of megaprojects.

And I get, as well-meaning friends keep reminding me, that at some level it's all tribute to our movement's work in helping kill the Keystone pipeline and highlighting Exxon's climate history, campaigns that cost the industry a lot of money. But I also understand that the simple fact that I've done nothing wrong is no defense against the destruction of a reputation: These are the same kind of people who turned John Kerry, a bona fide war hero, into a traitor through twisting and manipulation.

Merely having someone with a camera follow you somehow makes you feel as if you're doing something wrong. My house is covered in solar panels, and I plug my car into a socket those panels power. But environmentalists also live in the world we're trying to change: We take airplanes and rent buses for rallies; we make a living, shop for groceries. None of this should demand an apology. Changing the system, not perfecting our own lives, is the point. "Hypocrisy" is the price of admission in this battle.

And despite what the industry and its advocates insist, that does not make us all equally responsible for the climate crisis.

We're fighting for policy changes that will make it possible for us to have better choices: utilities that offer us renewable options, electric trains that make short-haul flights obsolete, public transit. Exxon and its ilk have been fighting for decades to keep these choices out of our reach, and then claim that we are voting with our dollars every time we sit in traffic or heat our homes with fossil fuels supplied by a utility that has a monopoly. They can play gotcha as much as they want, but all it proves is how badly we need better options. And we are still going to fight like heck to make sure options are available to everyone.

And yet, for all that logic, I still find myself on edge. To be watched so much is a kind of never-ending nightmare. And sometimes it's just infuriating. I skipped the funeral this summer of Patrick Sorrento, an important mentor to me at my college newspaper, because I didn't want my minder to follow me and cause a distracting spectacle. When my daughter reports someone taking pictures of her at the airport, it drives me nuts. I have no idea if it's actually this outfit; common decency would suggest otherwise, but that seems an increasingly rare commodity.

There's plenty else that scares me this summer, of course: Every month we're breaking temperature records, and Donald J. Trump has introduced a new snarl to our public life. Against these fears, the best one can hope for is a kind of resiliency. For a planet in desperate trouble, it's good news that the price of a solar panel has plummeted. For our nation, there's the hope that the social fabric -- the Little Leagues and Methodist churches and Black Lives Matter assemblies and League of Women Voters and library guilds and N.A.A.C.P. chapters -- remain just strong enough that we'll escape the narcissistic nihilism of Mr. Trump.

As for me, there's comfort in the knowledge that the climate movement doesn't depend on me. For years now, I've been stepping back, mostly because I think the kind of movement we need is one that has thousands of leaders in thousands of places, connected like the solar panels on the roofs of an entire planet.

Bill McKibben is the author of a dozen books, including The End of Nature and Deep Economy: The Wealth of Communities and the Durable Future. A former staff writer for The New Yorker, he writes regularly for Harper's, The Atlantic Monthly, and The (more...)
Related Topic(s): NAACP; Photographs; Surveillance; Twitter, Add Tags
Add to My Group(s)
Go To Commenting
The views expressed herein are the sole responsibility of the author and do not necessarily reflect those of this website or its editors.